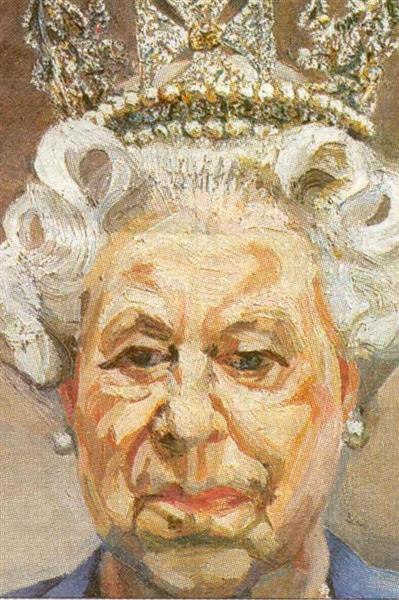 Freud painted many portraits of famous people throughout his career. The Queen is perhaps his most powerful and globally recognizable subject. While Freud normally worked large, this composition measures approximately nine and a half by six inches, making it one of his smallest paintings. Nonetheless, it depicts the British monarch as an imposing presence. The entire composition is filled by her face. A sliver of pearls adorns her throat, while atop her white hair is an elaborate, jeweled crown. The symmetrical details in the jewels and hair mark the parameters of the picture, and serve as a kind of psychic boundary for the work. The crown, an item Freud specifically requested she wear for the portrait, dominates the upper border of the picture.

After agreeing to pose for the artist, the Queen met Freud for a sitting in May of 2000. Making an exception from his usual practice of making a studio appointment, Freud traveled for sittings to St. James Palace at the Royal Collection's Friary Court, where she sat for him at the picture conservation studio. The small canvas took over six months to complete and was finally finished in December of 2001. By the time he was ready to paint the crown the Queen, who had other obligations, had run out of time. So a model had to be used. Freud, always a lightning rod for controversy, was accused of painting the Queen in an unflattering and unduly harsh light.

The project sparked debate and got mixed reviews (some saw it as a cheap publicity stunt by an artist with fading talent). Yet in his forthright observation of the Queen's features, one sees a raw intensity Freud had maintained throughout his career and refused to minimize, regardless of his subject. Among the more intriguing interpretations of this portrait, recently discussed by independent art historian Simon Abrahams, is that the Queen is a symbolic stand-in for the artist himself, a kind of alter-ego. The Queen's aging features in this portrait are remarkably similar to those of Freud himself, and the British press complained that the portrait looked nothing like her, adding credence to the theory.