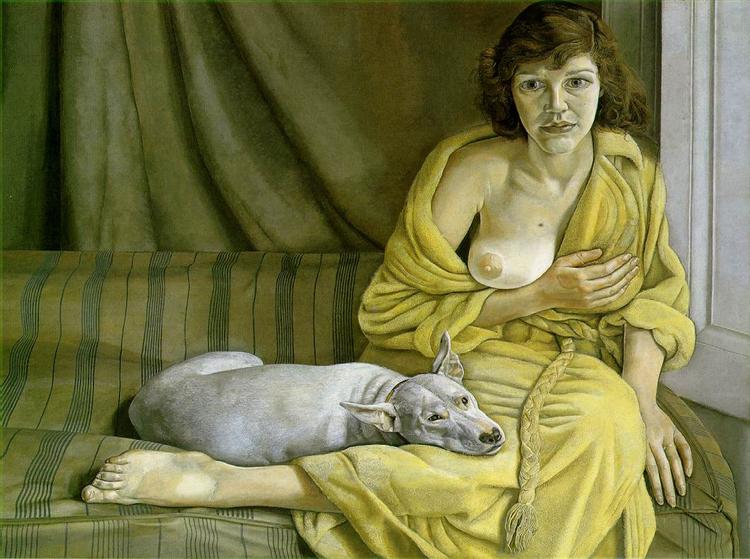 Girl with a White Dog

Typical of Freud's early period, Girl with a White Dog was created using a sable brush, which he used to apply the paint with linear precision, almost like a drawing. The subtle shading evokes a host of textures exuding softness, warmth, and the absence of immediate tension. The robe has slipped off the sitter's shoulder, exposing her right breast. Coupled with the absent stare of the woman and the dog, the muted colors and faint contours give this composition an overall flatness.

The sitter is Kitty Garman, Freud's first wife, and a noted beauty whose father was artist Jacob Epstein. The dog was one of two bull terriers they were given as a wedding gift.

Freud painted many portraits of Kitty during their brief marriage, which ended in divorce in 1952, due to his chronic infidelities. A weariness in the sitter's expression, the deep hollows under her eyes and the self-supporting gesture of the hand under the left breast hint at her discontent, despite this moment of calm. The analytic distance that came to characterize Freud's brilliance as an observer is reinforced by the absence of a name in the title, despite his intimate connection to the subjects. He was able to see certain things better because he remained aloof.