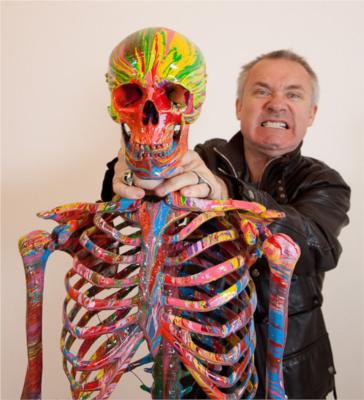 Damien Steven Hirst (/hɜːrst/; born 7 June 1965) is an English artist, entrepreneur, and art collector. He is one of the Young British Artists (YBAs), who dominated the art scene in the UK during the 1990s. He is reportedly the United Kingdom's richest living artist, with his wealth valued at £215M in the 2010 Sunday Times Rich List. During the 1990s his career was closely linked with the collector Charles Saatchi, but increasing frictions came to a head in 2003 and the relationship ended.

Death is a central theme in Hirst's works. He became famous for a series of artworks in which dead animals (including a shark, a sheep and a cow) are preserved—sometimes having been dissected—in formaldehyde. The best known of these was The Physical Impossibility of Death in the Mind of Someone Living, a 14-foot (4.3 m) tiger shark immersed in formaldehyde in a clear display case. He has also made "spin paintings," created on a spinning circular surface, and "spot paintings", which are rows of randomly coloured circles created by his assistants.

In September 2008, Hirst made an unprecedented move for a living artist by selling a complete show, Beautiful Inside My Head Forever, at Sotheby's by auction and bypassing his long-standing galleries. The auction raised £111 million ($198 million), breaking the record for a one-artist auction as well as Hirst's own record with £10.3 million for The Golden Calf, an animal with 18-carat gold horns and hooves, preserved in formaldehyde.

In several instances since 1999, Hirst's works have been challenged and contested as plagiarised. In one instance, after his sculpture Hymn was found to be closely based on a child's toy, legal proceedings led to an out-of-court settlement.

Hirst was born Damien Steven Brennan in Bristol and grew up in Leeds. He never met his father, and his mother married his stepfather when he was 2 and divorced 10 years later. His stepfather was reportedly a motor mechanic. Hirst's mother who was from an Irish Catholic background worked for the Citizens Advice Bureau, and has stated that she lost control of her son when he was young. He was arrested on two occasions for shoplifting. However, Hirst sees her as someone who would not tolerate rebellion: she cut up his bondage trousers and heated one of his Sex Pistols vinyl records on the cooker to turn it into a fruit bowl (or a plant pot). He says, "If she didn't like how I was dressed, she would quickly take me away from the bus stop." She did, though, encourage his liking for drawing, which was his only successful educational subject.

His art teacher at Allerton Grange School "pleaded" for Hirst to be allowed to enter the sixth form, where he took two A-levels, achieving an "E" grade in art. He was refused admission to Jacob Kramer School of Art when he first applied, but attended the college after a subsequent successful application to the Foundation Diploma course.

He went to an exhibition of work by Francis Davison, staged by Julian Spalding at the Hayward Gallery in 1983. Davison created abstract collages from torn and cut coloured paper which, Hirst said, "blew me away", and which he modelled his own work on for the next two years.