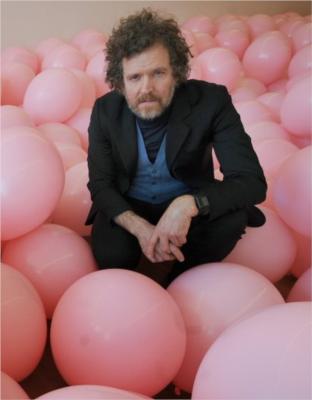 Photograph: Karen Robinson for the Observer

Martin Creed (born 1968) is a British artist and musician. He won the Turner Prize in 2001 for exhibitions during the preceding year, with the jury praising his audacity for exhibiting a single installation, Work No. 227: The lights going on and off, in the Turner Prize show. Creed lives and works in London.

Martin Creed was born in Wakefield, England. He moved with his family to Glasgow at age 3 when his silversmith father got a job teaching there. He grew up revering art and music. His parents were Quakers, and he was taken often to Quaker meetings. He attended Lenzie Academy, and studied art at the Slade School of Art at University College London from 1986 to 1990. Since then he has lived in London, apart from a period (2000—2004) living in Alicudi, an island off Sicily in the South of Italy. He currently lives and works back in London. He is a vegan.

Creed's work often makes use of whatever medium seems suitable. Painting, films, installations and live-action sculptures are all characteristic of his work. Since 1987 he has numbered each of his works, and most of his titles are descriptive: for example Work No. 79: some Blu-tack kneaded, rolled into a ball and depressed against a wall (1993) and Work No. 88, a sheet of A4 paper crumpled into a ball (1994). Creed's work Work No. 200: Half the air in a given space (1998) is a room which has half of its cubic space filled with balloons.

Creed won the 2001 Turner Prize for two exhibitions, Martin Creed Works and Art Now: Martin Creed shown across England during the preceding year. His submission for the Turner Prize show at the Tate Gallery was Work No. 227: The lights going on and off. The work was an empty room in which the lights switched on and off at 5-second intervals. As so often with the Turner Prize, this created a great deal of press attention, most of it questioning whether something as minimalist as this could be considered art at all. Nevertheless the jury praised this work, saying they "admired the audacity in presenting a single work in the exhibition and noted its strength, rigour, wit and sensitivity to the site".

His work has often excited controversy: a visitor threw eggs at the walls of Creed's empty room as a protest against the prize, declaring that Creed's presentations were not real art and that "painting is in danger of becoming an extinct skill in this country". In recent years Creed has been exhibiting paintings in nearly every exhibition he has done.

Work No. 1197 "All the bells in the country rung as quickly and as loudly as possible for three minutes" was commissioned to herald the start of the 2012 Summer Olympics.

In 2009, he wrote and choreographed Work No. 1020: Ballet, a live performance of Creed's music, ballet, words and film, originally produced by Sadler's Wells, London and performed in the Lilian Baylis Studio. In 2010, Work No. 1020: Ballet was performed at the Traverse Theatre, Edinburgh as part of the Edinburgh Festival Fringe and at The Kitchen, New York, in December 2013. Work No. 1020 was also performed in 2014 at the Queen Elizabeth Hall in connection with Creed's retrospective at the Hayward Gallery, London.