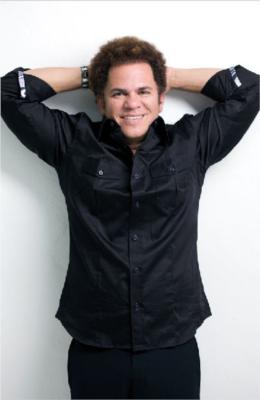 Romero Britto (born October 6, 1963) is a Brazilian artist, painter, serigrapher, and sculptor. He combines elements of cubism, pop art and graffiti painting in his work, using vibrant colors and bold patterns as a visual expression of hope and happiness.

Born in Recife, on the Northeast side of Brazil, Britto lived an extremely modest childhood while growing up among a big family of eight brothers and sisters. However, his innate creativity allowed Britto to fill his life with images of a bigger and more beautiful world beyond his own. Self-taught at an early age, he painted what he saw and what he imagined on surfaces such as newspapers, cardboard or any scraps that he could find. With an inordinate passion to excel, he prospered academically. Still, Britto's artistic nature eventually led him to seek experiences outside the classroom. In 1983, Britto went to Paris, France where he was introduced to the works of Matisse and Picasso. After exhibiting in a few galleries and private shows, Britto was encouraged to travel to the United States where Pop Art was flourishing.

Britto has lived in Miami, Florida since 1989. Shortly after Britto arrived in the United States, Michel Roux, founder of Absolute Vodka's Absolute Art Ad Campaign, happened to stop by Britto's first studio in Coconut Grove, Florida. Roux quickly asked Britto to reinterpret the famous bottle, which would be published and seen by millions. Britto was part of major international art fairs, among them were FIAC Paris and Art Salon Hong Kong. His exhibitions were shown around the globe some of which were the 2016 Presidential campaign of Governor Jeb Bush as well as for Monsanto, Bain Capital, Movado, Philip Morris, Academi (formerly Blackwater), Disney, Enrico Coveri, Pepsi, the United Nations, BMW and Royal Caribbean Cruises. Britto has one main art gallery in Miami, on South Beach on Lincoln Road. His name has been featured in well-known media including Forbes, Vanity Fair, The New Yorker, ARTNews and more.

Romeo Britto’s motto is “Art is too important not to share.” He dedicates a lot of his time and talent to international organizations such as St. Judges. Children’s Hospital, the American Red Cross, and Best Buddies International. He has been a significant contribution to protecting and preserving the Brazilian Rainforest, assisting the ill, funding AIDS research, and much more. Along with his artwork, this has helped build his well-reputed name. His passion for helping the community has led him to create the Britto Foundation in 2007. The foundation supports education and philanthropy for children. Based in Miami, the organization aims to nurture people's aspirations in art and culture and to help them engage more deeply in education and literacy programs, as well as positively contribute to the needs of those in more vulnerable populations. Through Britto's community initiatives, he aims to use his talent and knowledge to helps those less fortunate.

In the United States, Europe and Asia