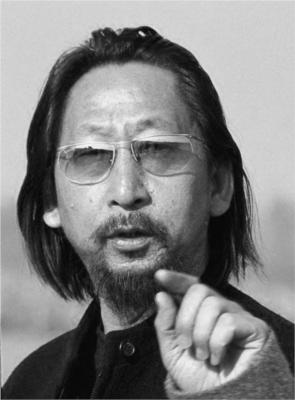 Wang Guangyi (in Chinese:王广义, born 1957) is a Chinese artist. He is known as a leader of the new art movement that started in China after 1989, and for his Great Criticism series of paintings which use images of propaganda from the Cultural Revolution (1966–1976) and contemporary brand names from western advertising.

Wang Guangyi was born in Harbin, Heilongjiang Province in 1957. Wang's father was a railway worker in northeastern China. Like many other people, Wang experienced the influence of the Cultural Revolution and had to work in a rural village for three years. He too became a railway worker. Wang tried for four years to get into a college. After several failed attempts, he enrolled at Zhejiang Academy of Fine Arts. He graduated from the oil painting department of the academy in 1984. He lives and works in Beijing, China.

His work is considered in China to be in the Political Pop genre; some consider this an error.

The North Pole is a recurring theme in Wang Guangyi’s early works; it is seen not in relation to its geographic characteristics, but as a symbolic place where a new faith is born, a place in which the individual must deal principally with himself but without freeing himself from the social. Working on the Frozen North Pole cycle (1984-1985), the group of young Artists of the North of which Wang Guangyi was a part, chose to confront themselves with Western philosophy. In his Post Classical series (1986-1988) Wang Guangyi worked on a synthetic revision of the great works of Western art tied to themes of religion, morality, faith and ideology. These paintings use various grey tones and encapsulate the human figure and its environment without many details. Wang Guangyi’s objective consisted in elaborating a style that deviated from that of classic art, an expressive strategy which derived from his reading of Gombrich.

Great Criticism is Wang Guangyi’s most famous cycle of works. These works use propaganda images of the Cultural Revolution and contemporary logos from Western advertisements. Wang Guangyi began this cycle in 1990 and ended it in 2007 when he became convinced that its international success would compromise the original meaning of the works, namely that political and commercial propaganda are two forms of brainwashing.

The series and installations VISA (1995-1998), Passport (1994-1995), and Virus Carriers (1996-1998) contain images of infants, grown adults and dogs accompanied by their respective names, places, dates of birth and genders. The aforementioned titles of these works are then imprinted upon these images. By forefronting the bureaucratic procedures tied to moving from one country to another, these works reveal that the organization of the State enacts its own defenses when evaluating the potential danger of individuals. Wang Guangyi perceives a well-established climate of reciprocal suspicion and looming danger, which ripened during the Cold War and still persists today, even if it has lost the oppressiveness born of forced indoctrination. Wang Guangyi’s reflection deals with the relationship that Power has with the individual, on which it maintains control by increasing collective fears to then propose itself as a bastion against unknown dangers that could suddenly strike against defenseless people. The artist maintains that through these forms of psychological pressure, a tacit agreement that provides protection against the contagion of new viruses in exchange for the renouncement of a part of one’s freedom is forged between the Power and the individual.