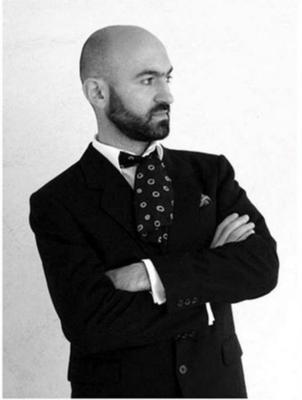 Dumitru Gorzo is a contemporary Romanian artist. His works feature a satiric attitude towards various issues of the society - especially his politically-tinged and „pornographic” paintings drawn much attention, making him controversial among critics and especially the public. He was a co-founder of the art group ”Rostopasca” (Celandine), which lasted from 1997 until 2001. Since 2008, Gorzo lives and exhibits in New York, USA.

Dumitru Gorzo (born 1975) is a Romanian contemporary artist. Born in Ieud, Romania, he currently lives and works in Bucharest and Brooklyn, New York.

Gorzo received an MFA in Visual Arts from the Bucharest National University of Arts in 1999, then studied with painter Florin Mitroi. He was one of the founding members of 'Rostopasca', an influential contemporary artistic movement in Romania. Gorzo's methods of working have ranged from street prankster to performance artist to studio painter and sculptor.

Gorzo first began to gain renown for his overtly sexual and political subject matter in 2003, when his guerrilla public installation Cocoons in Bucharest drew attention from a Romanian television station claiming the work had been done by Satanists. Gorzo had glued 350 small plaster, larvae-like figurines to the walls of buildings in the center of the Romanian capital, inciting public debate among passersby about their broader meaning.

His works tend to feature a satiric attitude toward societal issues, which has made him a controversial figure among the more conservative critics and the Romanian public. His works are varied in theme and medium, ranging from hand-hewn wooden reliefs with a Romanian folkloric aesthetic, to sculpture of found objects and paintings with a bold contemporary, conceptual, neo-pop sensibility.

In 2005, Gorzo had his leg broken in an assault following the opening of the provocatively titled show, Mister President is a Sexual Object, at the HT003 gallery in Bucharest, allegedly by unofficial secret-service agents. The show in question depicted the faces of all the Romanian presidents silkscreened onto pillows and impaled on a tree with wooden penises for branches.

Gorzo is currently represented by Slag Gallery in Brooklyn.