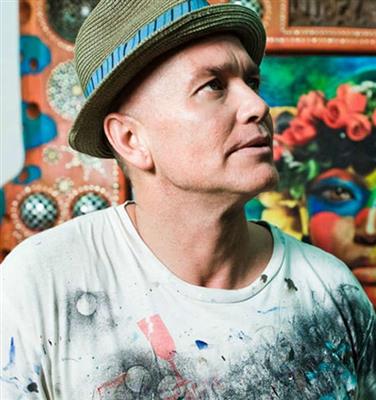 Ashley Bickerton (born 1959) is a contemporary artist, presently living in Bali. A mixed-media artist, Bickerton often combines photographic and painterly elements with industrial and found object assemblages. He is associated with the early 1980s art movement Neo-Geo, which includes artists such as Peter Halley.

Born in Barbados in 1959, Bickerton is the son of Derek Bickerton, a linguist and scholar of Creole and pidgin languages. His father's research work caused his family to move around the globe every several years. As a child Ashley Bickerton lived in a number of countries across four continents. The family finally settled in Hawaii in 1972. British by birth, Bickerton became a naturalized US citizen in the mid-1980s. He spent 12 years in New York where he established his career before finally settling on the island of Bali in 1993, where he presently resides.

Bickerton graduated from the California Institute of the Arts in 1982, then moved to New York to attend the Whitney Museum Independent Study Program. After exhibiting for a few years in New York, he was included in a four-person show at the Sonnabend Gallery in 1986, that included Jeff Koons, Peter Halley and Meyer Vaisman. In 2004 The New Museum exhibited "East Village USA," a show that featured "Neo-Geo" artists including Bickerton. In 2009 he was included in Pop Life: Art in a Material World, at the Tate Modern in London The following year he was exhibited in Collecting Biennials at the Whitney Museum of American Art, which acted as a counterpoint to the 2010 Biennial and paid homage to the previous 80 years of Whitney Biennials. He has had solo exhibitions at Lehman Maupin Gallery (2006, 2008, 2011), Sonnabend Gallery, (2000, 2004, 2006), both in New York, and White Cube in London (2001, 2009).

Over the last twenty-five years, Bickerton has exhibited his work internationally and is included in public art and museum collections. His works are held in the collections of the Museum of Modern Art; the Tate; the Fondation Cartier pour l'Art Contemporain, Paris; the Stedelijk Museum, Amsterdam; Berardo Collection Museum in Lisbon, Portugal; the Museum of Contemporary Art, Chicago; and the Whitney Museum of American Art, New York.

In April 2014, Bickerton held his first solo exhibition at Gajah Gallery. The month-long exhibition, "Junk Anthropologies", marked a new direction for the American master of philosophical funk, where he re-established himself as a master painter in the grand tradition. The focus of the works is about the ongoing corruption of Bali that he witnessed being a resident there, with the styles greatly influenced by Paul Gauguin, whom he has a perennial obsession for.

From April to August 2017, Bickerton had his first UK retrospective at Newport Street Gallery in London entitled "Ornamental Hysteria". Spanning more than three decades of the artist's career, the exhibition showcases 51 works, many of which were new and previously unexhibited pieces. Amongst the featured works was Canoe, Shark, Woman (2016), a sculpture created in Yogyakarta Art Lab which The Guardian described as "[having] the look of the ritual artefact of Bickerton’s tropical island obsession, creating a power object or fetish (as islanders do) with found objects (fish, flowers, beads) that is the more hypnotic for its solemn parody – silver vestal offering a hammerhead shark, coconuts in her Indonesian canoe".