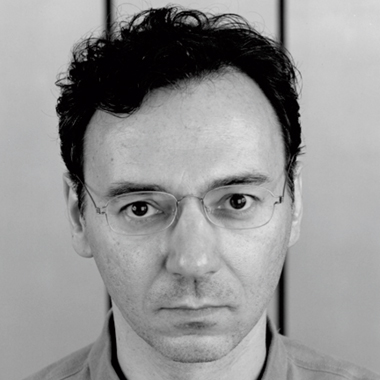 Peter Halley (born September 24, 1953) is an American artist and a central figure in the Neo-Conceptualist movement of the 1980s. Known for his Day-Glo geometric paintings, Halley is also regarded as a writer, the former publisher of index Magazine, and a teacher, having served as Director of Graduate Studies in Painting and Printmaking at the Yale University School of Art from 2002 to 2011. Halley lives and works in New York City.

Halley is an American painter. He came to prominence as an artist in the mid-1980s, as part of the generation of Neo-Conceptualist artists that first exhibited in New York’s East Village, including Jeff Koons, Haim Steinbach, Sarah Charlesworth, Annette Lemieux, Steven Parrino, Phillip Taaffe, Gretchen Bender, and Meyer Vaisman. Halley's paintings explore both the physical and psychological structures of social space; he connects the hermetic language of geometric abstraction—influenced by artists such as Barnett Newman and Ellsworth Kelly—to the actualities of urban space and the digital landscape. In the 1990s, he expanded his practice to include installations based around the technology of large-scale digital prints.

Halley is also known for his critical writings, which, beginning in the 1980s, linked the ideas of French Post-Structuralist theorists such as Michel Foucault and Jean Baudrillard to the digital revolution and the visual arts. From 1996 to 2005, Halley published Index Magazine, which featured in-depth interviews with emergent and established figures in fashion, music, film, and other creative fields. Having also taught art in several graduate programs, Halley became the Director of Graduate Studies in Painting and Printmaking at the Yale University School of Art, serving from 2002 to 2011.

Halley was born and raised in New York City. He is the son of Janice Halley, a registered nurse of Polish ancestry, and Rudolph Halley, an attorney and politician of German-Austrian Jewish descent. In 1951, Rudolph “became an instant celebrity,” as Halley has said, while serving as chief prosecutor for the United States Senate Special Committee to Investigate Crime in Interstate Commerce, also known as the Kefauver Committee (after Senator Estes Kefauver). “This series of hearings with various colorful mobsters was broadcast on television all over the country,” Halley notes. Rudolph was also assistant counsel to the wartime Truman Committee, investigating fraud and waste in defense contracting. He served as president of the New York City Council from 1951 to 1953, and ran for New York City Mayor in 1953. He passed away soon after at the age of forty-three, when Halley was three years old.

Other notable family members include Rudolph’s first cousin Carl Solomon (1928-1993), to whom Allen Ginsberg dedicated his epic poem "Howl (for Carl Solomon)" in 1955. The Halleys are also related to Samuel Shipman (1884-1937), a well-known and colorful writer of Broadway comedies in the 1920s. Halley's great aunt and uncle, Rose and A.A. Wyn, published Ace Comics from 1940 to 1956 and Ace Books from 1952 to 1973. Ace Books was an American publisher of science fiction that published William Burroughs’s first novel, Junkie, in 1953, as well as the first novels by several prominent science-fiction writers including Philip K. Dick, Samuel R. Delany, and Ursula K. LeGuin.