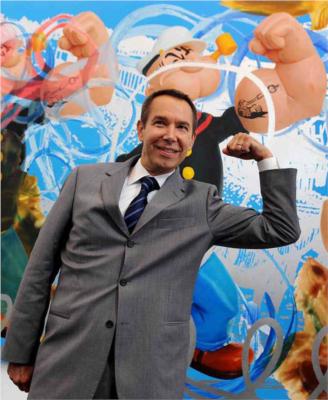 Jeffrey "Jeff" Koons (/kuːnz/; born January 21, 1955) is an American artist known for working with popular culture subjects and his reproductions of banal objects—such as balloon animals produced in stainless steel with mirror-finish surfaces. He lives and works in both New York City and his hometown of York, Pennsylvania.

His works have sold for substantial sums, including at least one world record auction price for a work by a living artist. On November 12, 2013, Koons's Balloon Dog (Orange) sold at Christie's Post-War and Contemporary Art Evening Sale in New York City for US$58.4 million, above its high US$55 million estimate, becoming the most expensive work by a living artist sold at auction. The price topped Koons's previous record of US$33.7 million and the record for the most expensive living artist, held by Gerhard Richter, whose 1968 painting, Domplatz, Mailand, sold for US$57.1 million at Sotheby's on May 14, 2013. Balloon Dog (Orange) was one of the first of the Balloon dogs to be fabricated, and had been acquired by Greenwich collector Peter Brant in the late 1990s.

Critics are sharply divided in their views of Koons. Some view his work as pioneering and of major art-historical importance. Others dismiss his work as kitsch, crass, and based on cynical self-merchandising. Koons has stated that there are no hidden meanings in his works, nor any critiques.

Koons was born in York, Pennsylvania, to Henry and Gloria Koons. His father was a furniture dealer and interior decorator; his mother was a seamstress. When he was nine years old, his father would place old-master paintings copied and signed by his son in the window of his shop in an attempt to attract visitors. As a child he went door to door after school selling gift-wrapping paper and candy to earn pocket money. As a teenager he revered Salvador Dalí so much that he visited him at the St. Regis Hotel in New York City.

Koons studied painting at the School of the Art Institute of Chicago and the Maryland Institute College of Art in Baltimore. While a visiting student at the Art Institute, Koons met the artist Ed Paschke, who became a major influence and for whom he worked as a studio assistant in the late 1970s. He lived in Lakeview, and then in the Pilsen neighborhood at Halsted Street and 19th Street.

After college, Koons moved to New York in 1977 and worked at the membership desk of the Museum of Modern Art while establishing himself as an artist. During this time, he dyed his hair red and would often cultivate a pencil mustache, after Salvador Dalí. In 1980, he got licensed to sell mutual funds and stocks and began working as a Wall Street commodities broker at First Investors Corporation. After a summer with his parents in Sarasota, Florida (Koons took on a brief job there as a political canvasser), he returned to New York and found a new career as a commodities broker, first at Clayton Brokerage Company and then at Smith Barney. He did this job when he encountered the problem of financing his first series, but also in order to be independent from the art market: "I could make exactly what art I wanted to make. And I would always know that I didn't need the art market."