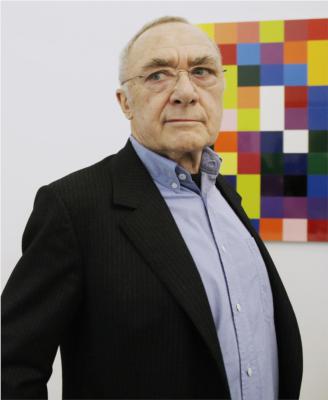 Gerhard Richter is considered among the most important living contemporary artists and is a crucial figure in Post-War German Art. Throughout his prolific career, he has demonstrated tremendous artistic range, shifting between figurative and abstract painting. Richter was born in 1932 in Dresden, Germany. As a child, he experienced the bombing of Dresden by the Allied Forces in 1945. Afterward, he remembered roaming around and exploring the ruins. It proved to be an important event in Richter’s life, and he alluded to the experience in two separate series: a 1963-64 series that depicted military aircraft and a series of townscapes that he painted in the late 1960s.

Richter spent his early years under two oppressive regimes, the Third Reich and the communist government that ruled East Germany after World War II. Between 1951 and 1956, Richter studied painting at the Fine Arts Academy in Dresden, which mostly followed the principles of Social Realism. In 1961, only a few months before the erection of the Berlin Wall, Richter managed to defect to West Germany. He continued his studies in Düsseldorf. There he met the artists Sigmar Polke, Konrad Lueg, Manfred Kuttner, and Blinky Palermo. In 1963, together with Polke, Lueg, and Kuttner, Richter founded the Capitalist Realism group, whose works came to be known as German Pop Art. During this period, Richter created paintings that were based on photographs he collected, such as Party (1963) and Women Descending the Staircase (1965). His collection of photographs would later develop into an archive of sorts that the artist called Atlas. Like most of his photo-paintings, Party and Women Descending the Staircase have a photographic source that can be found in Atlas.

Towards the end of the 1960s, Richter felt that he exhausted his photographic inspirations and began exploring an abstract style of painting. Throughout the years, Richter periodically experimented with several kinds of abstraction: color chart paintings like 1024 colors (1973), grey monochromes like Grey (1973), and colorful, gestural abstracts like Abstract Painting No.599 (1986). In the late 1980s, Richter took on the controversial subject of the deaths of the leaders of the German terrorist group, Baader-Meinhof, in the series 18 Oktober 1977. The paintings were based on published photographs, to which he later applied different painterly effects that obscured the images, as in Funeral (1988). Richter never shied away from political subjects, although he maintained that his paintings were not political statements. Instead, it seems that Richter’s main concern was to present complex issues and highlight their challenging aspects.

Richter’s later works expanded to a wide range of subjects: portraits of family and friends, still-life and landscapes. Betty (1988), a portrait of his daughter turning away from the viewer, signified Germany’s preoccupation with its past, as well as present struggles in establishing its identity. In 2007, Richter completed one of his most ambitious commissions, the Cologne Cathedral Window (2007). He based the design of the stained glass window on his color chart painting 4096 colors (1974). In 2018, the 86 year old artist made headlines for donating 18 paintings to provide permanent accommodation for the homeless population in the German State of North Rhine-Westphali

In October 2012, Richter's Abstraktes Bild set an auction record price for a painting by a living artist at $34 million (£21 million). This was exceeded in May 2013 when his 1968 piece Domplatz, Mailand (Cathedral square, Milan) was sold for $37.1 million (£24.4 million) in New York. This was further exceeded in February 2015 when his painting Abstraktes Bild sold for $44.52 million (£30.4 million) in London at Sotheby's Contemporary Evening Sale.

Richter was born in Hospital Dresden-Neustadt in Dresden, Saxony, and grew up in Reichenau, Lower Silesia (now Bogatynia, Poland), and in Waltersdorf (Zittauer Gebirge), in the Upper Lusatian countryside, where his father worked as a village teacher. Gerhard's mother, Hildegard Schönfelder, at the age of 25 gave birth to Gerhard. Hildegard's father, Ernst Alfred Schönfelder, at one time was considered a gifted pianist. Ernst moved the family to Dresden after taking up the family enterprise of brewing and eventually went bankrupt. Once in Dresden, Hildegard trained as a bookseller, and in doing so realized a passion for literature and music. Gerhard's father, Horst Richter, was a mathematics and physics student at the Technische Hochschule in Dresden. The two were married in 1931.

After struggling to maintain a position in the new Nationalist Socialist education system, Horst found a position in Reichenau. In Reichenau, Gerhard's younger sister, Gisela was born in November 1936. Horst and Hildegard were able to remain primarily apolitical due to Reichenau's location in the countryside. Horst, being a teacher, was eventually forced to join the National Socialist Party. He never became an avid supporter of Nazism, and was not required to attend party rallies. In 1942, Gerhard was conscripted into the Deutsches Jungvolk, but by the end of the war he was still too young to be an official member of the Hitler Youth. In 1943 Hildegard moved the family to Waltersdorf, and was later forced to sell her piano. He left school after 10th grade and apprenticed as an advertising and stage-set painter, before studying at the Dresden Academy of Fine Arts. In 1948, he finished higher professional school in Zittau, and, between 1949 and 1951, successively worked as an apprentice with a sign painter and as a painter. In 1950, his application for study at the Dresden Academy of Fine Arts was rejected as "too bourgeois". He finally began his studies at the Dresden Academy of Fine Arts in 1951. His teachers were Karl von Appen, Heinz Lohmar (de) and Will Grohmann.

Richter married Marianne Eufinger in 1957; she gave birth to his first daughter. He married his second wife, the sculptor Isa Genzken, in 1982. Richter had two sons and a daughter with his third wife, Sabine Moritz after they were married in 1995.

In the early days of his career, he prepared a wall painting (Communion with Picasso, 1955) for the refectory of his Academy of Arts as part of his B.A. Another mural entitled Lebensfreude (Joy of life) followed at the German Hygiene Museum for his diploma. It was intended to produce an effect "similar to that of wallpaper or tapestry".