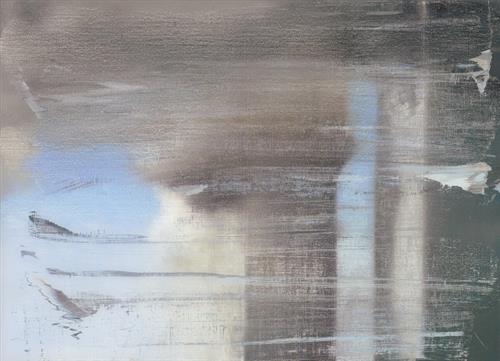 Richter painted September (2005) in response to the terrorist attacks on the World Trade Center on September 11, 2001. On that day, Richter was flying to New York; his flight was diverted to another airport after the news of the attacks. In a small way, Richter felt the impact of the historical tragedy as it happened. It was not the first time Richter took on such a complex and politically charged subject. Most notably, his series 18 Oktober 1977, deals with the deaths of the leaders of the German home-grown terrorist group, Baader-Meinhof.

September is one of Richter’s photo-paintings based on photographs. Richter began collecting photos in the early 1960s and used them as a basis for his work. Throughout the years, the collection developed into an archive that the artist named Atlas. At present, it contains over 800 sheets of paper with different images that piqued the artist’s interest. Atlas includes several photographs of terrorist attacks, which is indicative of Richter’s artistic process: he recognizes his subject through Atlas, selects an image, and then executes the painting. For September, he chose the dramatic moment of the second plane hitting one of the Twin Towers, the action that set in motion the collapse of the World Trade Center. Richter first painted the entire scene and then scraped the surface, exposing the white dots on the canvas. Through this process, the initially bright colors became muddled: mixing bright blues and oranges resulted in shades of grey and brown that dominate the canvas. Richter created the effect of a dissolving image that mirrors the depicted scene of the dissolving of the towers. In this way, the painting also engages the viewer’s memory; the familiar image is obscured, forcing the viewer to recollect and reexamine their memory of the event.

Like in 18 Oktober 1977, Richter continues to deal with the topic of terrorism. Even though Richter selects politically charged issues, he attempts to highlight the ambiguities, the inexplicable elements of the event. The sense of ambiguity relates to how collective memory functions, but it also points to how Richter as an artist, wishes to present these tragic occurrences. By blurring the image, his paintings do not provide answers. Instead, they emphasize everything that remains unknown. By choosing subjects that relate to contemporary history, Richter also engages with the artistic tradition of historical paintings. Generally speaking, historical paintings, such as Pablo Picasso’s Guernica (1937) and Jacques Louis David’s The Oath of Horatii (1784), are grand in scale and monumental in their depictions. The relatively small format of September (52x72cm) does not suit the grand, heroic historical painting. The size relates to how this event was processed around the world. It is the format of a TV screen, which is how the world watched the events of 9/11 as they unfolded. The format represents how contemporary events are processed by the public, transmitted through the screens of TV or cellphone.