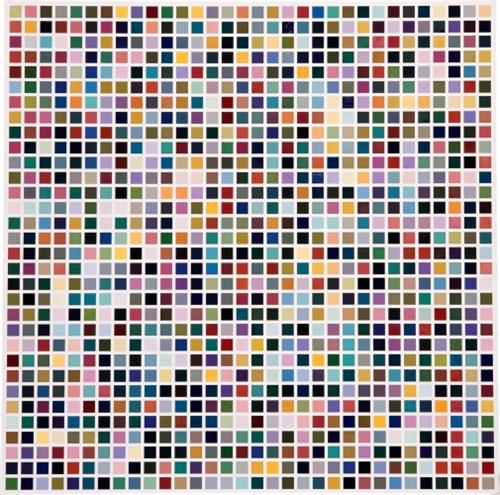 1024 colors (1973) is one of Richter’s well-known color chart paintings, which he began producing in the late 1960s. They were inspired by the commercial color charts found in hardware stores. Here, the different colors have no particular meaning or significance. He used color functions as a readymade, as an object found in the hardware store and another part of consumer culture. Even though the painting mimics a commercial color chart, the colors are not grouped in the same order. Instead, the painting was created through a predetermined mathematical system, and the colors were distributed at random across the grid. The white lines that form the grid are equally spaced, and each color occupies equal space within the painting. This kind of distribution points to indifference and meaninglessness: it is part of the artist’s premise that it is impossible to combine colors in a meaningful way.

Although Richter, at the time, was unfamiliar with the works of American artist Ellsworth Kelly, there are stylistic similarities between his color chart paintings and Kelly’s work. Kelly’s collages, such as Spectrum Colors Arranged by Chance VI (1951) and Spectrum Colors Arranged by Chance II (1951), were similar in both style and method. Like Richter, who used a mathematical system to arrange his colors, Kelly cut up his small squares and arranged them quickly and intuitively. Both artists worked within a system but found random methods that determined their creations. The earliest versions of Richter's color chart paintings were relatively simple, like Ten Colors (1966) and Color Chart (1966). By the 1970s, Richter developed the concept and created more massive and more complex color chart paintings and prints, among them 1024 colors.

Richter’s color chart paintings were born out of a creative standstill the artist experienced during the late 1960s. Richter felt he could no longer paint figurative paintings based on photographic images, which dominated his bodywork from 1961 to 1966. Because the artist found that he was drained of ideas for his figurative paintings, he began creating imageless paintings. In this way, Richter rejected his prior work while continuing to create new artworks - his color chart paintings, reflecting his feelings of emptiness and his disenchantment with his earlier works. At the same time, it opened Richter to the exploration of pure color and form. Richter introduced abstraction to his paintings, while still following his primary method and artistic principal. He believed that the plight of the modern artist was his inability to create new paintings without relying on other pre-arranged structures.

For this reason, Richter used photographs as sources for his 1960s figurative paintings. Similarly, when he moved to color chart painting, he created another system with an infinite pool of available combinations for his paintings. Richter’s color chart paintings proved essential and consequential for his later works. The artist used the painting 4096 colors (1974) as a base for one of his most substantial commissions, the stained glass Cologne Cathedral Window (2007), which replaced the window destroyed during World War II.