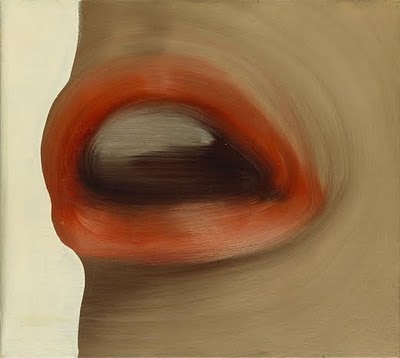 Mouth (Bridgette Bardot’s Lips) (1963) is an early painting by Gerhard Richter based on an image of the famous French actress Bridgette Bardot. Richter cropped the image, isolating her lips and mouth. The choice of Bardot was not coincidental: at the time, she was one of the most prominent sex symbols from Europe. Her public image exemplified the connection between sex and mass culture, specifically the commodification of sex in capitalist societies. Thus, by isolating Bardot’s famous sensual lips in Mouth, Richter created an image that is both playful and disturbing. The painting also has a surrealist quality: the blurred lips and mouth are dismembered and detached from the face and body. A few years later, Richter also used another image of Bardot in the painting Mother and Daughter (1965). Bardot’s appeal was not only limited to Richter’s works, but her iconic image was also captured by Andy Warhol in eight colorful paintings created in 1974.

Mouth and Mother and Daughter were examples of Richter’s early photo-paintings, whose sources were photographs collected by the artist. In 1962, Richter began collecting snapshots, postcards, newspaper cutting, and sketches. A few years later, Richter began to arrange the different images on loose sheets of paper, and at present, there are over 800 sheets. Over time, the collection became an art project in its own right called Atlas, which mixed collected images with personal photographs, and photographs taken by Richter himself. The collection offers significant insight into Richter’s artistic practice, and also reflects the different phases in his life.

Mouth was featured in one of Richter’s first public exhibitions, Living with Pop: A Demonstration for Capitalist Realism in Düsseldorf. The 1963 exhibition was a performance event staged in a furniture shop, where the artists exhibited their paintings in the shop setting. The exhibition was conceived and organized by Richter and his contemporaries, Manfred Kuttner, Konrad Lueg, and Sigmar Polke, that used the term ‘Capitalist Realism’ to describe their art. Capitalist Realism is at times thought of as German Pop Art because of its shared characteristics with Pop Art, namely the interest in mass media, consumerism, and the banality of daily life. Through humor and irony, the artists expressed their unique political situation of living in a divided Germany during the Cold War. The name, Capitalist Realism, served as a parallel to Socialist Realism (the dominant style in the Eastern German bloc) since both were essentially art forms created for the masses.

By late 1963, Richter no longer distorted his source photographs in the extreme manner visible in Mouth. He even destroyed several of his earlier paintings executed in this style. Perhaps, Richter would have also destroyed Mouth, but he already gave it to his fellow artist, Manfred Kuttner. In a 1993 interview, Richter expressed dislike for the painting, specifically its Pop Art style and the isolation and deformation of the face and mouth. However, he also stated that the painting was a representative example of his early work and the beginning of Pop Art.