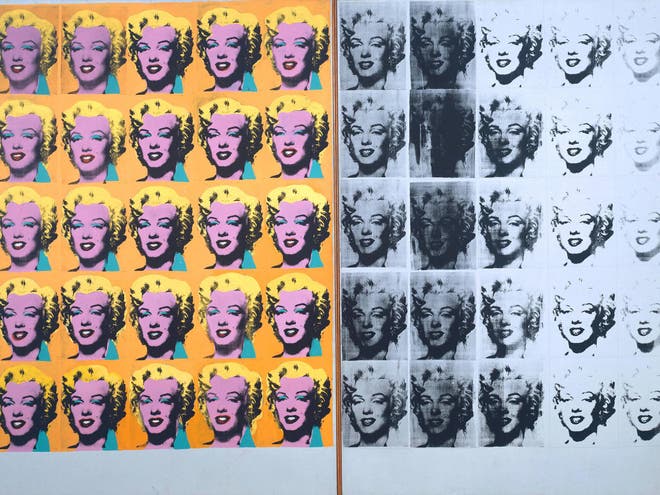 By creating paintings or sculptures of mass culture objects and media stars, the Pop art movement aimed to blur the boundaries between "high" art and "low" culture. The concept that there is no hierarchy of culture and that art may borrow from any source has been one of the most influential characteristics of Pop art.

It could be argued that the Abstract Expressionists searched for trauma in the soul, while Pop artists searched for traces of the same trauma in the mediated world of advertising, cartoons, and popular imagery at large. But it is perhaps more precise to say that Pop artists were the first to recognize that there is no unmediated access to anything, be it the soul, the natural world, or the built environment. Pop artists believed everything is inter-connected, and therefore sought to make those connections literal in their artwork.

Although Pop art encompasses a wide variety of work with very different attitudes and postures, much of it is somewhat emotionally removed. In contrast to the "hot" expression of the gestural abstraction that preceded it, Pop art is generally "coolly" ambivalent. Whether this suggests an acceptance of the popular world or a withdrawal, has been the subject of much debate.

The majority of Pop artists began their careers in commercial art: Andy Warhol was a highly successful magazine illustrator and graphic designer; Ed Ruscha was also a graphic designer, and James Rosenquist started his career as a billboard painter. Their background in the commercial art world trained them in the visual vocabulary of mass culture as well as the techniques to seamlessly merge the realms of high art and popular culture.

The Pop art collages of British artists Eduardo Paolozzi and Richard Hamilton convey the mixed feelings Europeans maintained toward American popular culture; both exalting the mass-produced objects and images while also criticizing the excess. In his collage, Just what is it that makes today's homes so different, so appealing? (1956), Hamilton combined images from various mass media sources, carefully selecting each image and composing the disparate elements of popular imagery into one coherent survey of post-war consumer culture. The members of the Independent Group were the first artists to present mass media imagery, acknowledging the challenges to traditional art categories occurring in America and Britain after 1945.

In US, Roy Lichtenstein proved that he could fulfill demands for a "great" composition even though his subject matter derived from comic books. In addition to using the imagery from these mass-produced picture books, Lichtenstein appropriated the techniques used to create the images in comic books to create his paintings. He not only adopted the same bright colors and clear outlines as popular art, but his most innovative contribution was also his use of Ben-Day dots: small dots used to render color in cheap mass-manufactured comics. Focusing on a single panel within a comic strip, Lichtenstein's canvases are not an exact facsimile, but are rather the artist's creative re-imaging of the composition in which elements may have been added or eliminated, the scale could shift, and text might be edited. By hand-painting the usually machine-generated dots, and recreating comic book scenes, Lichtenstein blurred the distinction between mass reproduction and high art.

James Rosenquist also directly appropriated images from popular culture for his paintings. However, rather than produce rote copies, Rosenquist exerted creative control through his surrealistic juxtapositions of products and celebrities, often inserting political messages. As part of his method, Rosenquist collaged magazine clippings from advertisements and photo spreads and then used the results as studies for his final painting. Rosenquist's training in billboard painting transitioned perfectly into his realistic renderings of those collages expanded onto a monumental scale. With works often much larger and wider than 6 meters, Rosenquist imbued the mundane with the same status previously reserved for high, sometimes royal, art subjects.

Andy Warhol is most famous for his vividly colored portraits of celebrities, but his subject matter has varied widely throughout his career. The common theme amidst the different subjects is their inspiration in mass consumer culture. His earliest works depict objects like Coca-Cola bottles and Campbell's soup cans, reproduced ad infinitum as if the gallery wall were a shelf in a supermarket. Warhol transitioned from hand painting to screenprinting to further facilitate the large-scale replication of pop images. Warhol's insistence on mechanical reproduction rejected notions of artistic authenticity and genius. Instead, he acknowledged the commodification of art, proving that paintings were no different from cans of Campbell's soup; both have material worth and could be bought and sold like consumer goods. He further equated the mass-produced status of consumer goods with that of celebrities in portraits like Marilyn Diptych (1962).

Renowned for his monumental public sculptures of everyday objects and his "soft" sculptures, Claes Oldenburg began his career on a much smaller scale. In 1961 he rented a storefront in New York City for a month where he installed and sold his wire and plaster sculptures of mundane objects, ranging from pastries to men's and women's undergarments, in an installation he dubbed The Store (1961). Oldenburg charged a nominal fee for each piece, which underscored his commentary on the role of art as a commodity. He began his soft sculptures shortly after The Store, constructing large, everyday objects, like a slice of cake, an ice cream cone, or a mixer, out of fabric and stuffing so the end result collapses in on itself like a deflating balloon. Oldenburg would continue to focus on commonplace objects throughout his career, moving from soft sculptures to grand public art, like the 45-foot-high Clothespin (1976) in downtown Philadelphia. Regardless of the scale, Oldenburg's work always maintains a playful attitude toward re-creating mundane things in an unconventional way in order to upend the viewer's expectations.

On the roster at Ferus Gallery, Ed Ruscha was one of the pivotal artists of Los Angeles Pop who worked in a variety of media, with the majority of these typically printed or painted. Emphasizing the omnipresence of signage in Los Angeles, Ruscha used words and phrases as subjects in his earliest Pop art paintings. His first reference to popular culture was the painting Large Trademark with Eight Spotlights (1962), where he appropriated the 20th Century Fox logo in a simplified composition with the hard edges and clear palette of a cartoon, echoing the similar billboards. His subsequent paintings of words further blurred the lines between advertising signage, painting, and abstraction, undermining the divisions between the aesthetic world and the commercial realm, some even incorporating three-dimensional objects like pencils and comic books on the canvases. Ruscha's work presages the Conceptual art of the later 1960s, driven by the idea behind the artwork rather than the specific image. Ruscha's exploration of a variety of commonplace images and themes went beyond merely reproducing them, but to examining the interchangeability of image, text, place, and experience.

Pop artists seemingly embraced the post-World War II manufacturing and media boom. Some critics have cited the Pop art choice of imagery as an enthusiastic endorsement of the capitalist market and the goods it circulated, while others have noted an element of cultural critique in the Pop artists' elevation of the everyday to high art: tying the commodity status of the goods represented to the status of the art object itself, emphasizing art's place as, at base, a commodity.