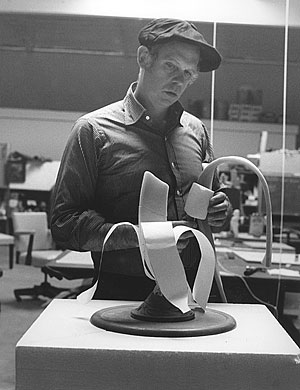 Claes Oldenburg in the studio. Photo by William Crutchfield

Claes Oldenburg is an American sculptor, best known for his public art installations typically featuring very large replicas of everyday objects. Another theme in his work is soft sculpture versions of everyday objects. Many of his works were made in collaboration with his wife, Coosje van Bruggen, who died in 2009 after 32 years of marriage. Oldenburg lives and works in New York.

Claes Oldenburg (born January 28, 1929) is an American sculptor, best known for his public art installations typically featuring large replicas of everyday objects. Another theme in his work is soft sculpture versions of everyday objects. Many of his works were made in collaboration with his wife, Coosje van Bruggen. Van Bruggen died in 2009 after 32 years of marriage. Oldenburg lives and works in New York.

Claes Oldenburg was born on January 28, 1929 in Stockholm, the son of Gösta Oldenburg and his wife Sigrid Elisabeth née Lindforss. His father was then a Swedish diplomat stationed in New York and in 1936 was appointed Consul General of Sweden to Chicago where Oldenburg grew up, attending the Latin School of Chicago. He studied literature and art history at Yale University from 1946 to 1950, then returned to Chicago where he took classes at The School of the Art Institute of Chicago. While further developing his craft, he worked as a reporter at the City News Bureau of Chicago. He also opened his own studio and, in 1953, became a naturalized citizen of the United States. In 1956, he moved to New York, and for a time worked in the library of the Cooper Union Museum for the Arts of Decoration, where he also took the opportunity to learn more, on his own, about the history of art.

Oldenburg's first recorded sales of artworks were at the 57th Street Art Fair in Chicago, where he sold 5 items for a total price of $25. He moved back to New York City in 1956. There he met a number of artists, including Jim Dine, Red Grooms, and Allan Kaprow, whose Happenings incorporated theatrical aspects and provided an alternative to the abstract expressionism that had come to dominate much of the art scene. Oldenburg began toying with the idea of soft sculpture in 1957, when he completed a free-hanging piece made from a woman's stocking stuffed with newspaper. (The piece was untitled when he made it but is now referred to as Sausage.)

By 1960 Oldenburg had produced sculptures containing simply rendered figures, letters and signs, inspired by the Lower East Side neighborhood where he lived, made out of materials such as cardboard, burlap, and newspapers; in 1961 he shifted his method, creating sculptures from chicken wire covered with plaster-soaked canvas and enamel paint, depicting everyday objects – articles of clothing and food items. Oldenburg's first show that included three-dimensional works, in May 1959, was at the Judson Gallery, at Judson Memorial Church on Washington Square. During this time, artist Robert Beauchamp described Oldenburg as "brilliant," due to the reaction that the pop artist brought to a "dull" abstract expressionist period.

In the 1960s Oldenburg became associated with the Pop Art movement and created many so-called happenings, which were performance art related productions of that time. The name he gave to his own productions was "Ray Gun Theater". The cast of colleagues who appeared in his Performances included artists Lucas Samaras, Tom Wesselman, Carolee Schneemann, Oyvind Fahlstrom and Richard Artschwager, dealer Annina Nosei, critic Barbara Rose, and screenwriter Rudy Wurlitzer. His first wife (1960–1970) Patty Mucha, who sewed many of his early soft sculptures, was a constant performer in his happenings. This brash, often humorous, approach to art was at great odds with the prevailing sensibility that, by its nature, art dealt with "profound" expressions or ideas. But Oldenburg's spirited art found first a niche then a great popularity that endures to this day. In December 1961, he rented a store on Manhattan's Lower East Side to house "The Store," a month-long installation he had first presented at the Martha Jackson Gallery in New York, stocked with sculptures roughly in the form of consumer goods.