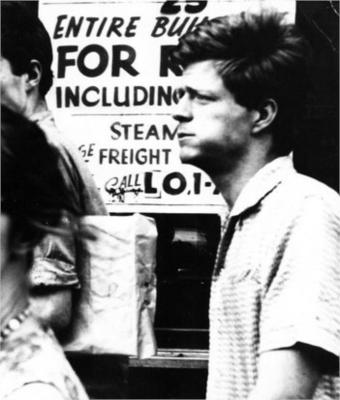 Red Grooms (born Charles Rogers Grooms on June 7, 1937) is an American multimedia artist best known for his colorful pop-art constructions depicting frenetic scenes of modern urban life. Grooms was given the nickname "Red" by Dominic Falcone (of Provincetown’s Sun Gallery) when he was starting out as a dishwasher at a restaurant in Provincetown and was studying with Hans Hofmann.

Grooms was born in Nashville, Tennessee during the middle of the Great Depression. He studied at the Art Institute of Chicago, then at Nashville's Peabody College. In 1956, Grooms moved to New York City, to enroll at the New School for Social Research. A year later, Grooms attended a summer session at the Hans Hofmann School of Fine Arts in Provincetown, Massachusetts. There he met experimental animation pioneer Yvonne Andersen, with whom he collaborated on several short films.

Red Grooms belongs to a generation of artists who, in G. R. Swenson's words, "took the world too seriously not to be amused by it." As Judith Stein notes, "At times Grooms's humor has an absurdist streak, full of the impetuous energy and preposterous puns of the Marx Brothers. He shares a comic sense with Bob and Ray whose straight-man/funny-man teamwork plays off against the mundane conventions of daily life. As an empiricist with a keen political sense and a retentive memory for visual facts, Grooms follows in the tradition of William Hogarth and Honoré Daumier, who were canny commentators on the human condition."

In 1969, Peter Schjeldahl compared Grooms to Marcel Duchamp, because both embodied "a movement of one man that is open to everybody."

In the spring of 1958, Grooms, Yvonne Andersen and Lester Johnson each painted twelve-foot by twelve-foot panels, which they erected with telephone poles on a parking lot adjacent an amusement park in Salisbury, MA.."

Inspired by artist-run spaces such as New York's Hansa Gallery and Phoenix, and Provincetown's Sun Gallery, Grooms and painter Jay Milder opened the City Gallery in Grooms' second-floor loft in the Flatiron District. When Phoenix refused to show Claes Oldenburg, Grooms and Milder dropped out of Phoenix and City Gallery presented Oldenberg's first New York exhibition, as well as that of Jim Dine. Other artists who showed at City Gallery include Stephen Durkee, Mimi Gross, Bob Thompson, Lester Johnson, and Alex Katz. Grooms recalls, "We were reacting to Tenth Street. In '58 and '59, Tenth Street was sort of like SoHo is now, and it was getting all the lively attention of everyone downtown....We were just kids in our twenties..and had a flair for attracting people to our openings."

During the late 1950s and early 1960s, Grooms made a number of "Happenings". The best known was The Burning Building, staged at his studio (dubbed "The Delancey Street Museum" for the occasion) at 148 Delancey Street in New York's Lower East Side between December 4 and 11, 1959.

Inspired by George Méliès's 1902 film A Trip to the Moon, Grooms' early film Shoot the Moon (1962) features celebrants played by Edwin Denby, Alex Katz and Grooms seen shredding library books to make confetti." Other Grooms films include:The Big Sneeze (1962), a hand-drawn comic filmed by Rudy Burckhardt; Before an' After (1964), a sadomastic comedy that casts Mimi Gross as part dominatrix/part healthclub operator; Fat Feet (1966), a collaboration with Mimi Gross, Yvonne Andersen and Dominic Falcone that begins where Shoot the Moon ends; Tapping Toes (1968-70), which uses his first sculpto-pictorama City of Chicago (1967) as its set; Conquest of Libya by Italy (1912-13) (1972-3), a black and white animation that spoofs that era's newsreels; Hippodrome Hardware (1973), based on Grooms' 1972 live performance of the same name, whose main character Mr. Ruckus is played by Grooms; Grow Great (1974), a live-action short that features Mimi Gross as the household consumer; Little Red Riding Hood (1978), which features his daughter Saskia; and Man Walking Up (1984).