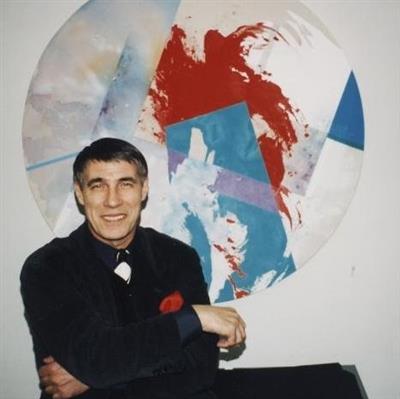 Jerry W. McDaniel (born 1935) is an American heterogeneous artist; graphics artist, illustrator, communication designer, educator and modernist painter. He distinguished himself by doing advertising work for numerous large corporations (PanAm, Intercontinental Hotels, Philip Morris International), creating posters, doing book and magazine illustrations, and influencing numerous students of advertising and communication design. In parallel with his commercial career he was a prolific multimedia artist, painting in acrylic and in watercolor, in various fields such as landscape, portraits, sports, and political graphics. He also designed sports stamps. He was one of the first illustrators to embrace computer graphics.

McDaniel was born during the Great Depression on a farm called The Jake White Place on Rabbit Ridge near Zaleski, in Vinton County, Ohio. His father Hoyt Glenn (Ben), a 25-year-old cattle farmer, married Lillian, age 16, in West Virginia three months before Jerry was born. At the beginning of World War II, McDaniel's father, fearing the draft, sold all the livestock and moved the family to Athens, Ohio. After his father died in 1951, his mother moved the family to Logan, Ohio to find employment.

Jerry was a Boy Scout of Troop 154, Union Furnace, OH and was advanced to the rank of Eagle Scout in 1951. Then he received the Outstanding National Boy Scout Award. He started drawing and painting when he was 5 years old encouraged by his parents who had little education. His mother Lillien was an amateur artist. He soon became the artist of the local area. In his senior High School year Jerry was an apprentice manager at J. C. Penny in Logan, OH. The high school art teacher, recognizing his talent, and knowing that he has no money to go to school was the one to make him aware of a scholarship, guide him to prepare a portfolio, and actually drove to Columbus to file Jerry's portfolio. Today Jerry brings his contribution to the Brighten Your Future (BYF) organization (established in 1988) to assist Logan High School graduates in continuing their education by providing financial assistance based on need. McDaniel earned a scholarship to the Columbus College of Art and Design (CCAD). He worked his way through College as a mapmaker for the Ohio State Department of Hydrology. Jerry W. McDaniel is acknowledged by CCAD as one of their notable alumni who played a leadership role in industry. Jerry McDaniel was the first alumnus of CCAD to be offered the Award for Excellence (then called "Award for Outstanding Alumnus"), in 1982. He graduated from CCAD twice, once with a Professional Certificate in 1957 (when the school was called "Columbus Art School") and then with a BFA in 1972 (CCAD).

Moving to New York in July 1957, he worked as a package designer for Continental Can Corporation. McDaniel's first work appeared in Redbook magazine in September 1957. The long-time Dean/President of CCAD, Joseph V. Canzani, was carrying this drawing by McDaniel in his wallet and was showing it to everyone saying "Look what our kids are doing." After military service as a Spec 9 architect, McDaniel returned to New York, becoming a graphic designer/art director for the LW Froehlich Company, a large pharmaceutical advertising agency.