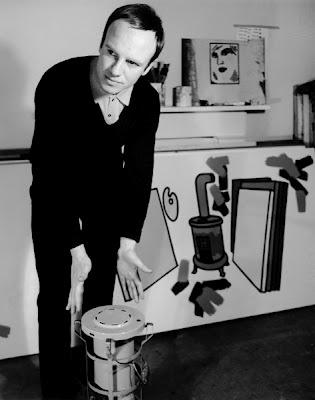 Patrick Joseph Caulfield, CBE, RA was an English painter and printmaker known for his bold canvases, which often incorporated elements of Photorealism within a pared down scene. He was associated with British Pop art, though he considered himself a "formal artist".

Patrick Joseph Caulfield, CBE, RA (29 January 1936 – 29 September 2005), was an English painter and printmaker known for his bold canvases, which often incorporated elements of photorealism within a pared-down scene. Examples of his work are Pottery and Still Life Ingredients.

Patrick Joseph Caulfield was born on 29 January 1936 in Acton, west London. During the second world war Caulfield's family returned to Bolton in 1945, where his parents were born, to work at the De Havilland factory. Leaving Acton Secondary Modern at the age of 15, Caulfield secured a position as a filing clerk at Crosse & Blackwell and later transferred to the design studio, working on food display and carrying out menial tasks. At 17, he joined the Royal Air Force at RAF Northwood, pre-empting requirement for national service. Inspired by the 1952 film Moulin Rouge about the artist Henri de Toulouse-Lautrec, he spent his free time attending evening classes at Harrow School of Art (now part of the University of Westminster).

Patrick Caulfield studied at Chelsea School of Art from 1956 to 1960, and during this time he won two prizes which funded a trip he made to Greece and Crete upon graduation. The visit to the island proved important, with Caulfield finding inspiration in the Minoan frescoes and the bright, hard colours on Crete. One of his greatest friends was the abstract painter John Hoyland, whom he first met at the Young Contemporaries exhibition in 1959. Progressing to the Royal College of Art from 1960 to 1963, his contemporaries included David Hockney and Allen Jones. He taught at Chelsea School of Art from 1963–71. In 1964, he exhibited at the New Generation show at London's Whitechapel Gallery, which resulted in him being associated with the pop art movement. This was a label Caulfield was opposed to throughout his career, seeing himself rather as "a 'formal' artist".

From the mid-1970s he incorporated more detailed, realistic elements into his work; After Lunch (1975) is an early example. Still-life: Autumn Fashion (1978) contains a variety of styles – some objects have heavy black outlines and flat colour, but a bowl of oysters is depicted more realistically and other areas are executed with looser brushwork. Caulfield later returned to his earlier, more stripped-down style of painting.

Caulfield's paintings are figurative, often portraying a few simple objects in an interior. Typically, he used flat areas of simple colour surrounded by black outlines. Some of his works are dominated by a single hue.

In 1987, Caulfield was nominated for the Turner Prize for his show The Artist's Eye at the National Gallery in London. In 1996 he was made a CBE.


On 24 May 2004, a fire in a storage warehouse destroyed many works from the Saatchi collection, including three by Caulfield. In September 2010 Caulfield and five other British artists, Howard Hodgkin, John Walker, Ian Stephenson, John Hoyland, and R.B. Kitaj were included in an exhibition entitled The Independent Eye: Contemporary British Art From the Collection of Samuel and Gabrielle Lurie, at the Yale Center for British Art.