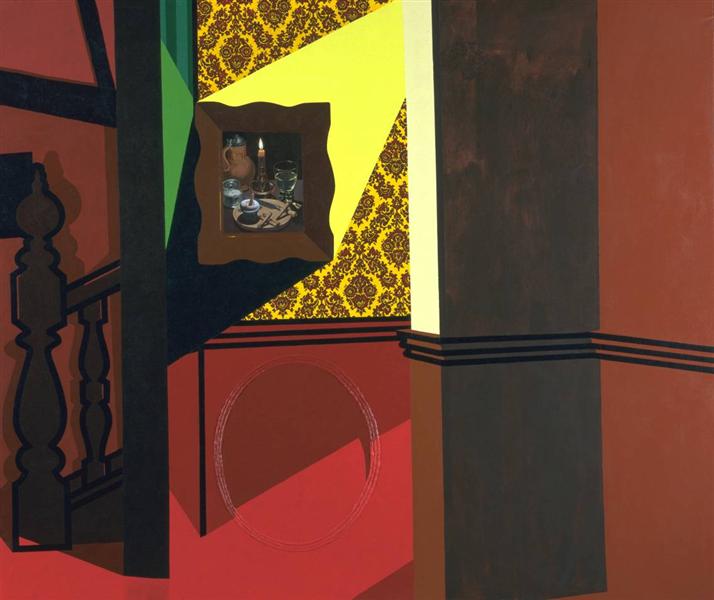 Interior with a Picture

This large oil painting shows a domestic interior. But instead of choosing a traditional view of a sitting room, bedroom or dining room, Caulfield has focussed on a confined area that is the junction between a landing and two corridors.

All the elements are perspectivally correct, but greatly simplified. The effect is to make the space seem simultaneously real and cartoon-like. Although the distance between the viewer and the furthest point in the scene is perhaps no more than twelve feet, there is nevertheless a strong sense of depth within the picture. This is because the foreground, middle ground and background are strongly delineated by the architecture and divide the canvas into thirds.

Caulfield's domestic interiors are often lifted directly from 1950s interior decorating magazines and they retain their original aspirational mood. Devoid of narrative, Caulfield nevertheless imbues each canvas with a powerful emotional register by suffusing them with a dominant saturated colour. Frequently melancholic, these interiors are always totally still and without a human presence except maybe for a light left on.

Many of his interior scenes also play with methods of portraying different forms, combinations and sources of light. He also incorporates trompe d'oeil and photorealistic elements in order to playfully explore the relationship between notions of reality, artifice and illusion. Caulfield was interested in showing how no one method of representation within an artwork can claim to be more or less 'real' than another.