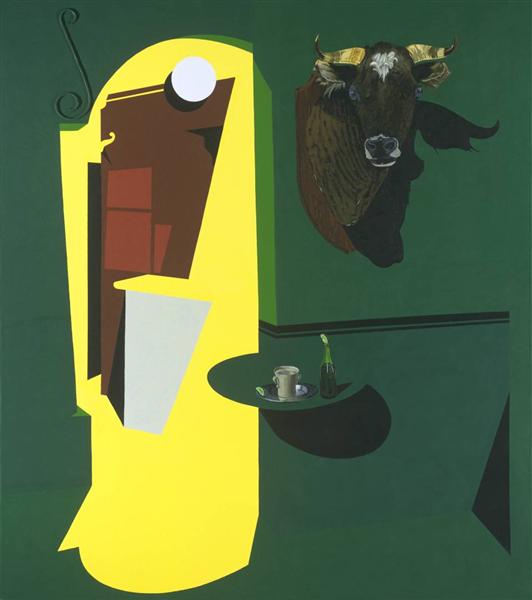 In the late 1990s the National Gallery, London commissioned twenty-four artists from Europe and North America to produce work in response to the gallery's collection. "Hemingway Never Ate Here", which was Patrick Caulfield's contribution to the exhibition, takes as its central motif A Cup of Water and a Rose on a Silver Plate, c.1630 (National Gallery, London) by the Spanish seventeenth century painter Francisco de Zurbarán (1598-1664). The motif reappears in Zurbarán's Still Life with Basket of Oranges, 1633 (The Norton Simon Foundation, Pasadena). Though Caulfield had always admired the Spanish still life paintings in the National Gallery, his choice was partly determined by his wish to celebrate his son's recent marriage to a Spaniard.
While it is probable that Zurbarán considered the simple composition of his still life paintings as an expression of divine order and that the objects in them have religious significance (clear water and the rose are both symbols associated with the purity and holiness of the Virgin Mary), Caulfield has stated that his primary interest in this painting lies in its formal simplicity, and not in its Christian undercurrents. Although he has meticulously rendered the cup of water and the silver plate as they appear in Zurbarán's painting, the flower has been replaced by a segment of lime. To the right he intended to paint a designer beer with a lime wedge in its neck, but chose a tonic bottle because it was shorter and thus would not break the line of the dado rail above. Since the late 1980s the practice of inserting lime wedges into beer bottles has often come to serve as a fashionable mark of Hispanic culture.
The bull's head, painted from an actual stuffed head that Caulfield hired in London, was included after he visited a bar off the Plaza Mayor in Madrid in 1998 where a similar one was hung. During the same trip he discovered a bar bearing the inscription 'Hemingway never ate here', a wry recommendation in a city dotted with bars claiming to have served the famous American writer. Ernest Hemingway's evocations of Spain in such books as Fiesta contributed to a national stereotype characterised by noble matadors and hard drinking.
Caulfield's play with signs of cultural identity is matched by his use of pictorial conventions. The high realism evident in the rendering of the bull's head and the still life objects is juxtaposed with a heavily reductive and flat background. While the realist elements command stable spatial positions, the rest of the interior is ambiguous spatially. The relation of the round table with the still life objects to the wall behind is difficult to establish, as is the means by which the table is supported. Likewise how the room through the archway connects with the foreground is not resolved. In the upper left a scroll made from a length of sash cord has been applied to the canvas surface and painted green. As with Interior with a Picture, 1985-6 (Tate T07112) where an oval motif is formed from three thick lines of acrylic paint squeezed direct from the tube, Caulfield points out the artifice of pictorial space by introducing a real three-dimensional object into the painting. The exploration of real and artificial is a central theme in his investigation into painting and culture.