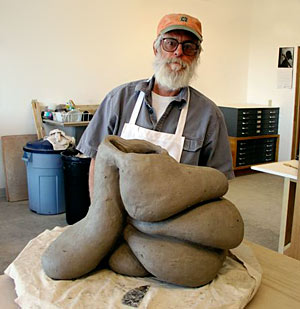 Kenneth Price (February 16, 1935 – February 24, 2012) was an American artist who made ceramic sculpture. He studied at the Chouinard Art Institute and Otis Art Institute (now Otis College of Art and Design) in Los Angeles, before receiving his BFA degree from the University of Southern California in 1956. He continued his studies at Chouinard Art Institute in 1957 and received an MFA degree from New York State College of Ceramics at Alfred University in 1959. Kenneth Price studied ceramics with Peter Voulkos at Otis and was awarded a Tamarind Fellowship.

He is best known for his abstract shapes constructed from fired clay. Typically, they are not glazed, but intricately painted with multiple layers of bright acrylic paint and then sanded down to reveal the colors beneath. Ken Price lived and worked in Venice, California and Taos, New Mexico. He is represented by the Matthew Marks Gallery, New York.

Price was born and raised in Los Angeles, California. Price’s earliest aspirations were to be an artist, “As far back as I can remember, I always wanted to be an artist. Even when I was a kid I would make drawings and little books, and cartoons..,” he states. Price enrolled in his first art ceramics course at Santa Monica City College in 1954, where he quickly embraced a formal craft tradition as espoused by Marguerite Wildenhain. He subsequently studied at the Chouinard Art Institute in Los Angeles, before receiving his BFA degree from the University of Southern California in 1956.

In the 1950s Price lived along the Pacific coastline, where his interest in surfing and Mexican pottery developed. During surfing trips in Southern California, Price and his friends, “always made a point of hitting the curio stores in [Tijuana], because they had great pottery. …just looking was a great education in earthenware pottery.” Price’s ceramic work at USC could be characterized as functional vessels derived from a folk pottery tradition.

As a student at USC, Price spent time visiting the ceramics studio at the Otis Art Institute where ceramic artist Peter Voulkos was teaching. Price has often cited Voulkos as his strongest single influence as a student. After finishing his degree at USC, Price spent a portion of the next year as a graduate student at Otis. There he studied (under Voulkos) with Billy Al Bengston, John Mason, Mike Frimkess, Paul Soldner, Henry Takemoto and Jerry Rothman. Price writes about the group at Otis: “We’ve been cited as the people who broke away from the crafts hierarchy and substituted so-called ‘total freedom!’ Actually we were a group of people who were committed to clay as a material and wanted to use it in ways that had something to do with our time and place.”

In 1958, Price left Otis for Alfred University (with a six month detour in the Army Reserves). “I went to Alfred to try and develop some low-fire, brightly colored glazes, but also to try and get away from the influence of Voulkos, which was very strong on me.” During his time at Alfred, Price was able to formulate some of the glazes he desired, using a lead base. In 1959, Price returned to Los Angeles having received an MFA in Ceramics from the New York State College of Ceramics at Alfred University.