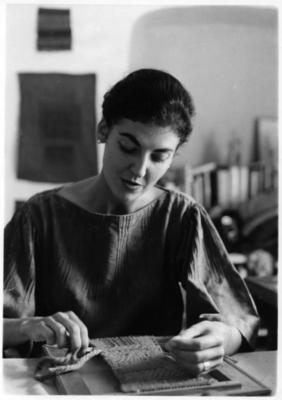 Sheila Hicks (born in Hastings, Nebraska, 1934) is an American artist. She lives and works in Paris, France. Prior to that, she lived and worked in Guerrero, Mexico (1959–63).

Sheila Hicks received BFA ('57) and MFA ('59) degrees in painting from the Yale School of Art . She was awarded a Fulbright scholarship to Chile (1957–58), photographed archaeological sites in the Andes and travelled to the volcanic region of Villarrica, the island of Chiloé, and Tierra del Fuego, which continues to influence her work. From 1959 to 1964 she resided and worked in Mexico. Since 1964, Hicks lives and works in Paris, France.

In 1959, Henri Peyre, the Sterling Professor of French Emeritus at Yale University, selected Hicks for a grant to study in France (1959–60), which enabled her to meet the pre-Colombian textile scholar and ethnologist Raoul D'Harcourt.

Subsequently, Hicks moved to Taxco el Viejo, Mexico where she began weaving, painting, and teaching at the National Autonomous University of Mexico (UNAM) at the invitation of Mathias Goeritz who also introduced to the architects Luis Barragán and Ricardo Legorreta Vilchis.

She photographed extensively with her Rolleiflex. Her subjects included the architecture of Felix Candela and artists active in Mexico.

Hicks' art ranges from the minuscule to the monumental. Her materials vary as much as the size and shape of her work. Having begun her career as a painter, she has remained close to color, using it as a language she builds, weaves and wraps to create her pieces.

Hicks's work is characterised by her direct examination of indigenous weaving practices in the countries of their origin. This has led her travel through five continents, studying the local culture in Mexico, France, Morocco, India, Chile, Sweden, Israel, Saudi Arabia, Japan and South Africa, developing relationships with designers, artisans, industrialists, architects, politicians and cultural leaders.

In 2007, the publication Sheila Hicks: Weaving as Metaphor, designed by Irma Boom to accompany the exhibition of the same name at Bard Graduate Center, was named "Most Beautiful Book in the World" at the Leipzig Book Fair.

In 2010 a retrospective of Hicks' 50-year career originated at the Addison Gallery in Andover, Mass. with additional venues at the ICA in Philadelphia, and at The Mint Museum in Charlotte, North Carolina. This included both miniature works (her "minimes") and large scale sculpture.