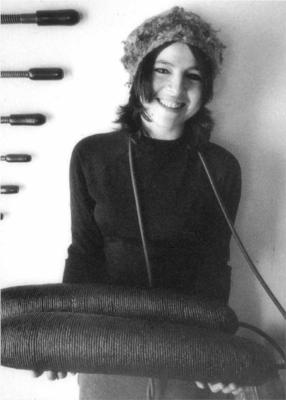 Eva Hesse was a Jewish German-born American sculptor, known for her pioneering work in materials such as latex, fiberglass, and plastics.

Eva Hesse (January 11, 1936 – May 29, 1970), was a Jewish German-born American sculptor, known for her pioneering work in materials such as latex, fiberglass, and plastics. She is one of the artists who ushered in the postminimal art movement in the 1960s.

Hesse was born into a family of observant Jews in Hamburg, Germany, on January 11, 1936. When Hesse was two years old in December 1938, her parents, hoping to flee from Nazi Germany, sent Hesse and her older sister, Helen Hesse Charash, to the Netherlands to escape Nazi Germany,aboard one of the last Kindertransport trains. Kindertransport.

After almost six months of separation, the reunited family moved to England and then, in 1939, emigrated to New York City, where they settled into Manhattan's Washington Heights. In 1944, Hesse's parents separated; her father remarried in 1945 and her mother committed suicide in 1946. In 1962, she met and married sculptor Tom Doyle (1928 - 2016); they divorced in 1966.

In October 1969, she was diagnosed with a brain tumor, and she died on Friday, May 29, 1970. Her death, after three operations within a year, at age 34 ended a career spanning only 10 years.

Hesse graduated from New York's School of Industrial Art at the age of 16, and in 1952 she enrolled in the Pratt Institute of Design. She dropped out only a year later. When Hesse was 18 years-old, she interned at Seventeen magazine. During this time she also took classes at the Art Students League. From 1954-57 she studied at Cooper Union and in 1959 she received her BA from Yale University. While at Yale, Hesse studied under Josef Albers and was heavily influenced by Abstract Expressionism.

After Yale, Hesse returned to New York, where she became friends with many other young minimalist artists, including Sol LeWitt, Donald Judd, Yayoi Kusama, and others. Her close friendship with Sol LeWitt remained until the end of her life. The two frequently wrote to one another, and in 1965 LeWitt famously counseled a young doubting Eva to "Stop [thinking] and just DO!" Hesse and LeWitt went on to become two of the most influential artists of the 1960s, and their friendship aided in the artistic development of each of their works.

In 1962, Eva Hesse married fellow sculptor Tom Doyle, and in 1965, the two moved to Germany so Tom could pursue an artist residency from German industrialist and collector Friedrich Arnhard Scheidt. Hesse and Doyle, whose marriage was coming apart, lived and worked in an abandoned textile mill in the Ruhr region of Germany for about a year. Their studio was set up in a disused part of Friedrich Arnhard Scheidt's textile factory in Kettwig-on-the-Ruhr near Essen. The building still contained machine parts, tools, and materials from its previous use and the angular forms of these disused machines and tools served as inspiration for Hesse’s mechanical drawings and paintings. Hesse was not happy to be back in Germany, but began sculpting with materials that had been left behind in the abandoned factory. Her first sculpture, a relief titled Ring Around Arosie featured cloth-covered cord, electrical wire, and masonite. This year in Germany marked a turning point in Hesse's career. From this point on she would continue to make sculptures, which became the primary focus of her work. Returning to New York City in 1965, she began working and experimenting with the unconventional materials which would become characteristic of her work: latex, fiberglass, and plastic.