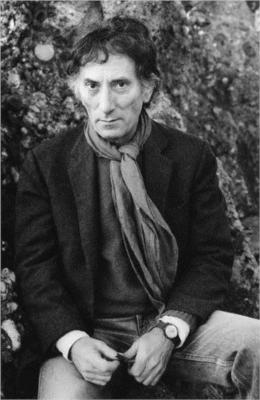 Giovanni Anselmo is an Italian artist .

From 1954 to 1964 he devoted himself to painting, but in 1965 he turned to the creation of objects inspired by observation of natural events and energies, which he exhibited in 1967 at the Galleria Sperone in Turin. In 1968 he joined the Arte Povera movement, embodying actions or ideas through combinations of contrasting and opposed materials (that didn't involved industrial process, which is why the movement was called Arte Povera, "poor art"), whose weight, gravity and vigour he explored. In 1972 he turned to words and their immateriality to explore the relationship between abstract categories of thought, such as general and particular, finite and infinite, culture and nature, the passing of historical time and the hypothesis of the eternity of universal physical laws, the routine of experience and the abstraction of philosophical principles. He took part in Documenta 5 and 7, organized at Kassel in 1972 and in 1982. In 1990 he was awarded the Leone d’Oro for painting at the 44th Venice Biennale. His striving for a universal energy and an idea of infinity led the artist to represent actions of approach and communication between different realities in sculptures which express a compressed force, blocked “at the limit”, at a moment of balance. The Museo d'Arte Moderna in Bologna (MamBo) held in 2006 a wide-ranging anthological exhibition conceived by the artist as a total work. He lives and works in Turin and on the island of Stromboli.

Giovanni Anselmo (born in 1934 in Borgofranco d'Ivrea, Province of Turin, Italy) is an artist who emerged in Italy after World War II within the art movement called Arte Povera.

He participated in Arte Povera events starting in 1967, when he displayed his work in the context of the exhibition ConTempL'azione. This show was curated by Daniela Palazzoli in three galleries in Turin: Christian Stein, Sperone, and ll Punto.

Anselmo's first solo exhibition was in 1968 at the Galleria Sperone in Milan. One of his works from 1971 is titled Invisible. Another from 1984 is titled senza titolo. Anselmo participated in the Venice Biennales of 1978, 1980 and 1990. He has held solo exhibitions around the world since debuting in Milan. His exhibitions have been held in the Renaissance Society, Chicago (1997), Palais des Beaux-Arts, Brussels (2002), Museum Kurhaus Kleve (2004), Stedelijk Museum, Gent (2005), and Kunstmuseum Winterthur (2013) and his work is present in the permanent collection at Collezione Maramotti since the 2007.