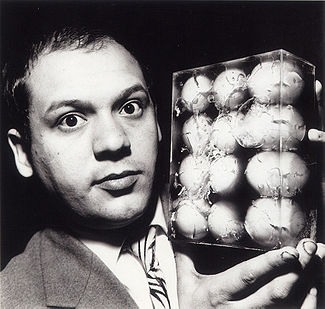 Meroni Manzoni di Chiosca e Poggiolo, better known as Piero Manzoni (July 13, 1933 – February 6, 1963) was an Italian artist best known for his ironic approach to avant-garde art. Often compared to the work of Yves Klein, his own work anticipated, and directly influenced, the work of a generation of younger Italian artists brought together by the critic Germano Celant in the first Arte Povera exhibition held in Genoa, 1967. Manzoni is most famous for a series of artworks that call into question the nature of the art object, directly prefiguring Conceptual Art. His work eschews normal artist's materials, instead using everything from rabbit fur to human excrement in order to "tap mythological sources and to realize authentic and universal values".

His work is widely seen as a critique of the mass production and consumerism that was changing Italian society (the Italian economic miracle) after World War II. Italian artists such as Manzoni had to negotiate the new economic and material order of post-war Europe through inventive artistic practices which crossed geographic, artistic, and cultural borders.

Manzoni died of myocardial infarction in his studio in Milan on February 6, 1963. His contemporary Ben Vautier signed Manzoni's death certificate, declaring it a work of art.

Self-taught as an artist, Manzoni first exhibited at the Soncino's Castle in Soncino in August 1956, at the age of 23. His early work was broadly gestural, and showed the influence of Milanese proponents of Nuclear Art, such as Enrico Baj. His later works, from approximately 1957 until his death in 1963, questioned and satirized the status of the art object as it had been conceived throughout modernism. Influences include earlier (though still active) artists like Marcel Duchamp and contemporaneous practitioners Ben Vautier and Yves Klein.

Manzoni's work changed irrevocably after visiting Yves Klein's exhibition 'Epoca Blu' at the Galleria Apollinaire in Milan, January 1957. This exhibition consisted of 11 identical blue monochromes. By the end of the year he had ceased producing work influenced by the prevailing trends in Art Informel, to works that responded directly to Klein's monochromes. Called Achromes, they invariably looked white but were actually colourless. In these paintings Manzoni experimented with various pigments and materials. Initially favouring canvases coated in gesso (1957–1958), he also worked with kaolin, another form of white clay often used in the production of porcelain. The kaolin works are generally made from clay covered canvases folded horizontally, or sometimes cut-out squares of canvas coated in the clay and adhered onto the canvas; he created just nine large-scale relief paintings depicting folded cloth. As well as Yves Klein, these works showed the influence of Lucio Fontana and Alberto Burri and the American artist Robert Rauschenberg, who had painted neutral white canvases in 1951. Later he would create Achromes from white cotton wool, fiberglass, rabbit skin and bread rolls. He also experimented with phosphorescent paint and cobalt chloride so that the colours would change over time. In addition to these fabricated materials, the artist's own bodily products and features became art. In addition to his famous Merda d'Artista, in which Manzoni's own excrement became a series of art objects, the use of fingerprints, blood, and breath also figured into his experimental body of work.