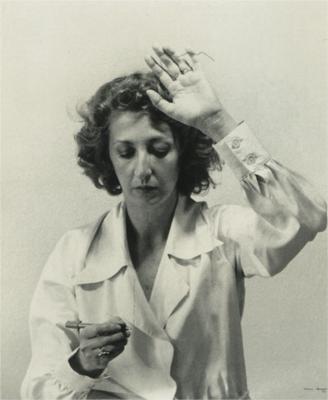 Helena Almeida (1934) is a Portuguese artist known for her work in photography, performance art, body art, painting and drawing.

Almeida was born in Lisbon in 1934. She is the daughter of the sculptor Leopoldo de Almeida (1898-1975). In 1955, Almeida completed the painting course at the School of Fine Arts in Lisbon. She married architect Artur Rosa. Their daughter Joana Rosa became an artist. After spending some years raising her family, in 1964 she obtained a scholarship and moved to Paris.

Almeida exhibited for the first time in 1967. At this exhibit her works already reveal traces of future work - three-dimensional paintings reverse the physical components. Visitors to this exhibit saw the paintings from back to front. Of note Almeida used shutters or blinds which transformed into paintings. Her goal is to break down the perception of a painting. The idea of the blinds is to show what is "hidden" and view of a painting as a window - through the back of a canvas.

Starting in 1969 Almeida defined a new aspect of her work, the desire for self-representation, in an exhibit which became the basis of her future work. She exhibited a black and white photograph of herself wearing a canvas, arms spread and looking down - as in Christ carrying the cross. This photograph asserted her belief in "identifying herself with the being of her work." This became an ongoing theme: there is no difference between the work and artist's body. In her work, a woman's image is always present, but the image is transformed in a painting or drawing. Almeida avoids creating self-portraits. Rather, "My work is my body, my body is my work." "I am the canvas." Her work has been described as "halfway between a performance (capturing an instant), and body art (the body itself as the absolute protagonist).

In the early 70's Almeida returned to three dimensional sketching, with drawings that use horsehair threads and appear to jump off the page. She refers to this work as "painting outwards." In this process she worked without an easel or canvas.

In 1975, Almeida brought together three disciplines, photography, painting and drawing. The drawing was represented by the horsehair threads; painting in three colors - blue or red sometimes black; photography serves as a meta-narrative. The broad range of her work and experimentation includes "design to cinema, from paintings to comics, from photography to sculpture, from architecture to performance." Almeida's work is shown in the Tate Modern in London, the Museum of Art in New York, the Museu d'art Contemporary de Barcelona, and also in her home town in Lisbon.