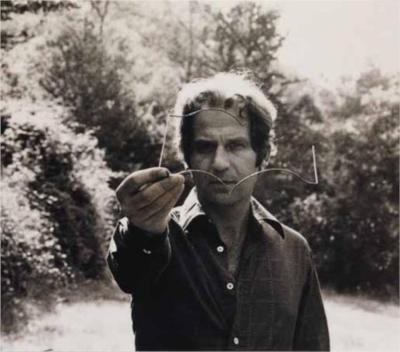 Luis Camnitzer (born 1937) is a German-born Uruguayan artist and academic who resides in the United States. He is among the most important conceptual artists in Uruguay.

Luis Camnitzer was born in Lübeck, Germany in 1937 and grew up in Montevideo, Uruguay. In Montevideo, he attended the University of Montevideo's School of Fine Arts, where he studied sculpture and architecture. He later returned to Germany to study at the Academy of Fine Arts in Munich. Two years later, Camnitzer held his first solo exhibition, at the Center of Arts and Letters Montevideo.

He moved to New York City in 1964, where he and fellow artists Liliana Porter and José Guillermo Castillo founded the New York Graphic Workshop, a printmaking studio focused on the mathematical and repetitive nature of printmaking and dedicated to reviving the importance of printmaking as a contemporary art form.

Since 1969, Camnitzer has focused on political subjects including identity, language, freedom, ethical debates, and historical tragedy. His art is conceptual, which is popular for Latin American artists, as it lacks European artistic influences or other boundaries. As an example, his work Leftovers (1970) consists of 200 small boxes representing toxic waste shipped from First World countries to Third World ones.

Camnitzer is a Uruguayan citizen.

Luis Camnitzer in the collection of The Museum of Modern Art