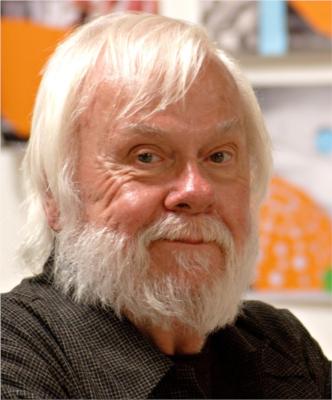 John Anthony Baldessari (born June 17, 1931) is an American conceptual artist known for his work featuring found photography and appropriated images. He lives and works in Santa Monica and Venice, California.

Initially a painter, Baldessari began to incorporate texts and photography into his canvases in the mid-1960s. In 1970 he began working in printmaking, film, video, installation, sculpture and photography. He has created thousands of works that demonstrate—and, in many cases, combine—the narrative potential of images and the associative power of language within the boundaries of the work of art. His art has been featured in more than 200 solo exhibitions in the U.S. and Europe. His work influenced Cindy Sherman, David Salle, Annette Lemieux, and Barbara Kruger among others.

Baldessari was born in National City, California to Hedvig Jensen, a Danish nurse, and Antonio Baldessari, an Italian salvage dealer. Baldessari and his elder sister were raised in Southern California. He attended Sweetwater High School and San Diego State College. Between 1960 and 1984, he was married to Montessorian teacher Carol Ann Wixom; they have two children.

In 1959, Baldessari began teaching art in the San Diego school system. He kept teaching for nearly three decades, in schools and junior colleges and community colleges, and eventually at the university level. When the University of California decided to open up a campus in San Diego, the new head of the Visual Art Department, Paul Brach, asked Baldessari to be part of the originating faculty in 1968. At UCSD he shared an office with David Antin. In 1970, Baldessari moved to Santa Monica, where he met many artists and writers, and began teaching at CalArts. His first classes included David Salle, Jack Goldstein, Mike Kelley, Ken Feingold, Tony Oursler, James Welling, Barbara Bloom, Matt Mullican, and Troy Brauntuch. While at CalArts, Baldessari taught "the infamous Post Studio class", which he intended to "indicate people not daubing away at canvases or chipping away at stone, that there might be some other kind of class situation." The class, which operated outside of medium-specificity, was influential in informing the context for addressing a student's art practice at CalArts. He quit teaching at CalArts in 1986, moving on to teach at UCLA, which he continued until 2008. At UCLA, his students included Elliott Hundley and Analia Saban.

By 1966, Baldessari was using photographs and text, or simply text, on canvas. His early major works were canvas paintings that were empty but for painted statements derived from contemporary art theory. An early attempt of Baldessari's included the hand-painted phrase "Suppose it is true after all? WHAT THEN?" (1967) on a heavily worked painted surface. However, this proved personally disappointing because the form and method conflicted with the objective use of language that he preferred to employ. Baldessari decided the solution was to remove his own hand from the construction of the image and to employ a commercial, lifeless style so that the text would impact the viewer without distractions. The words were then physically lettered by sign painters, in an unornamented black font. The first of this series presented the ironic statement "A TWO-DIMENSIONAL SURFACE WITHOUT ANY ARTICULATION IS A DEAD EXPERIENCE" (1967).