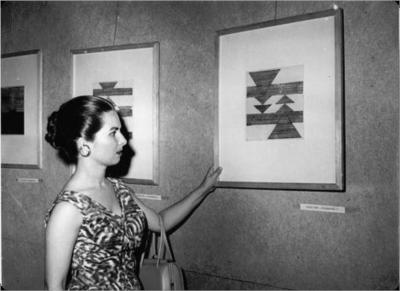 Lygia Pape at the National Exhibition of Concrete Art, 1956

Lygia Pape (7 April 1927 – 3 May 2004) was born in Nova Friburgo, Rio de Janeiro, Brazil. Lygia Pape worked in sculpture, engraving, and filmmaking. She was an influential Brazilian artist, active in both the Concrete and Neo-Concrete Movement in Brazil during the 1950s and 1960s. Later on in the 1960s and 1970s, Pape produced more videos and installations using sarcastic and critical metaphors against the Brazilian dictatorship. From the 1980s onward, these metaphors became more subtle. Her artwork seems to have worked as a vehicle for existential, sensorial, and psychological life experiences, much of it based in geometry and relying on both the intellectual and physical participation of the viewer.

Along with Hélio Oiticica and Lygia Clark, she sought to expand the territory of contemporary art to include aspects of interaction, though, like the Concretists, she remained opposed to any kind of representation in art. Whereas Lygia Clark's art took her towards sensorial interaction and Helio Oiticia's works led him to the spatial and social existence of the marginalized, Pape's contribution to art synthesized the aesthetic, ethical, and political spheres.

By the age of 20, Lygia Pape had joined the concrete art movement. The term "concrete art" is attributed to Theo van Doesburg, who founded the name in 1930. Concrete art intended to defend the objectivity of art though paintings that "have no other significance than [themselves]." It forbade the use of natural forms, lyricism and sentiment. Concrete art movement first appeared in Brazil after the São Paulo Bienal in 1951. The Bienal inspired the formation of two Brazilian Concrete art groups: the Ruptura, based in São Paulo, and Grupo Frente, based in Rio de Janeiro. The Ruptura had rigid theories of painting and emphasized the two-dimensionality of the support (often metal), the use of glossy enamel over traditional oil paints, modularity, and rationality over expression. Their counterpart was the Frente artists, which had a less rigid approach to Concrete art. In the mid to late 1950s, the Ruptura group and the Frente group clashed when the Ruptura artists accused those in Grupo Frente of valuing experience over theory and embracing experimentation, expressiveness, and subjectivity. In 1959, the Rio artists, including Lygia Pape, broke away from the rigidity of Concrete art and formed a Neo-concrete Movement.

After her involvement with the Grupo Frente Concrete artists, Lygia Pape transitioned into the short wave of Neo-concrete art. Pape was a signatory of the Neo-concrete Manifesto, along with Lygia Clark and Helio Oiticica. The Neo-Concretists believed that art represented more than the materials used to create, but that it also transcended these "mechanical relationships". The manifesto claimed that art does not just occupy mechanical space, but it "transcends it to become something new." Neo-concrete artists aimed to create a new expressive space in which an artwork is a living being to have a relationship with and to experience through the senses. Thus, Neo-concrete artworks usually required the viewer's active participation. It is through the presence and participation of the viewer that the artwork becomes complete.