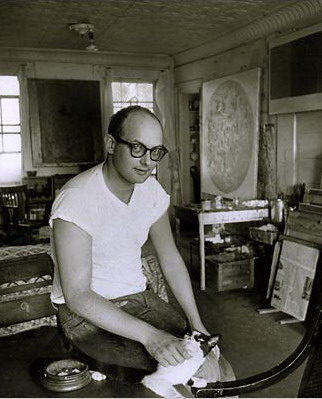 Solomon "Sol" LeWitt was an American artist linked to various movements, including Conceptual art and Minimalism.

LeWitt came to fame in the late 1960s with his wall drawings and "structures" (a term he preferred instead of "sculptures") but was prolific in a wide range of media including drawing, printmaking, photography, and painting. He has been the subject of hundreds of solo exhibitions in museums and galleries around the world since 1965.

LeWitt came to fame in the late 1960s with his wall drawings and "structures" (a term he preferred instead of "sculptures") but was prolific in a wide range of media including drawing, printmaking, photography, painting, installation and artist's books. He has been the subject of hundreds of solo exhibitions in museums and galleries around the world since 1965.

LeWitt was born in Hartford, Connecticut to a family of Jewish immigrants from Russia. His mother took him to art classes at the Wadsworth Atheneum in Hartford. After receiving a BFA from Syracuse University in 1949, LeWitt traveled to Europe where he was exposed to Old Master paintings. Shortly thereafter, he served in the Korean War, first in California, then Japan, and finally Korea. LeWitt moved to New York City in 1953 and set up a studio on the Lower East Side, in the old Ashkenazi Jewish settlement on Hester Street. During this time he studied at the School of Visual Arts while also pursuing his interest in design at Seventeen magazine, where he did paste-ups, mechanicals, and photostats. In 1955, he was a graphic designer in the office of architect I.M. Pei for a year. Around that time, LeWitt also discovered the work of the late 19th-century photographer Eadweard Muybridge, whose studies in sequence and locomotion were an early influence. These experiences, combined with an entry-level job as a night receptionist and clerk he took in 1960 at the Museum of Modern Art (MoMA) in New York, would influence LeWitt's later work.

LeWitt taught at several New York schools, including New York University and the School of Visual Arts, during the late 1960s. In 1980, LeWitt left New York for Spoleto, Italy. After returning to the United States in the late 1980s, LeWitt made Chester, Connecticut, his primary residence. He died at age 78 in New York from cancer complications.

LeWitt is regarded as a founder of both Minimal and Conceptual art. His prolific two and three-dimensional work ranges from wall drawings (over 1200 of which have been executed) to hundreds of works on paper extending to structures in the form of towers, pyramids, geometric forms, and progressions. These works range in size from gallery-sized installations to monumental outdoor pieces. LeWitt’s first serial sculptures were created in the 1960s using the modular form of the square in arrangements of varying visual complexity. In 1979, LeWitt participated in the design for the Lucinda Childs Dance Company's piece Dance.