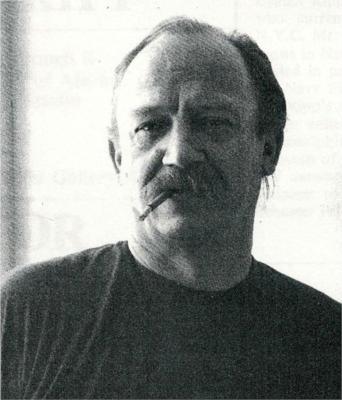 Lyman Emmet Kipp, Jr. (December 24, 1929 - March 30, 2014) was a sculptor and painter who created pieces that are composed of strong vertical and horizontal objects and were often painted in bold primary colors recalling arrangements by De Stijl Constructivists. Kipp is an important figure in the development of the Primary Structure style which came to prominence in the mid-1960s.

Kipp's early work in the 1950s focused on geometric, plaster reliefs and cast bronzes (see No. 1 - 1959 or Directional I). He moved on to large, geometric, welded pieces composed of post and beam elements emphasizing the vertical during the 1960s (see Andy's Cart Blanche, Muscoot or Hudson Bay). Finding it difficult to transport large, heavy, welded pieces, he turned to angled sections and sheets of steel and aluminum that could be bolted together on site. Typically the pieces were painted with bright colors and the thin edges were often defined with bright, complementary colors (see Long Distance,Chicksaw or Kobi). In the late 1970s, Kipp's steel sheets began to move into the air on thin legs (see Lockport 1977, Salute to Knowledge or Yoakum Jack).

Kipp was a founding member of ConStruct, the artist-owned gallery that promoted and organized large-scale sculpture exhibitions throughout the United States. Other founding members include Mark di Suvero, Kenneth Snelson, John Raymond Henry and Charles Ginnever.