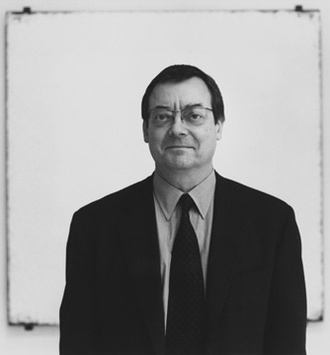 Robert Ryman (born May 30, 1930) is an American painter identified with the movements of monochrome painting, minimalism, and conceptual art. He is best known for abstract, white-on-white paintings. He lives and works in New York.

Ryman was born in Nashville, Tennessee. After studying at the Tennessee Polytechnic Institute, Cookeville, between 1948 and 1949, and at the George Peabody College for Teachers between 1949 and 1950, Ryman enlisted in the United States army reserve corps and was assigned to an army reserve band during the Korean War. Ryman moved to New York City in 1953, intending to become a professional jazz saxophonist. He had lessons with pianist Lennie Tristano, which later informed his painting. Ryman soon took a day job at the Museum of Modern Art as a security guard to make ends meet, and met the artists Sol LeWitt and Dan Flavin, who were co-workers with him at MoMA. Immediately after quitting his job at MoMA, Ryman spent the next year working in the art division of the New York Public Library. He also met artist Roy Lichtenstein during this period of the 1950s.

Captivated by the newly acquired abstract expressionist works of Mark Rothko, Willem de Kooning, Clyfford Still, Jackson Pollock and Barnett Newman, Ryman became curious about the act of painting. From 1953 to 1960, he worked at the MoMA as a guard in order to be close to painting. He purchased some art supplies at local store and began experimenting in his apartment in 1955. That year, Ryman finished what he considers his earliest professional work, a largely monochrome painting titled Untitled (Orange Painting) (1955–59).

Ryman had a close relationship with the late conservator Orrin Riley, who would frequently give him advice on archival materials, many times testing the acidity of media the artist was interested in using. He has been interviewed by the television writer and producer Barbaralee Diamonstein twice, once for the book and video production Inside New York's Art World in 1979 and again for Inside the Art World in 1993.

In 1961 the artist married art historian Lucy Lippard. They had a son together, Ethan Ryman, in 1964, who was a sound engineer and recently began making art. This marriage ended in divorce. He later married artist Merrill Wagner. Robert Ryman's sons, Cordy Ryman and Will Ryman are also artists and currently work in New York City.

Ryman is often classified as a minimalist, but he prefers to be known as a "realist" because he is not interested in creating illusions, but only in presenting the materials he has used in compositions at their face value. As he wrote in a statement for a 2010 exhibition at Pace Wildenstein, "I am not a picture painter. I work with real light and space, and since real light is an important aspect of the paintings, it always presents some problems." The majority of his works feature abstract expressionist-influenced brushwork in white or off-white paint on square canvas or metal surfaces. A lifelong experimenter with media, Ryman has painted and/or drawn on canvas, linen, steel, aluminum, plexiglas, lumasite, vinyl, fiberglass, corrugated paper, burlap, newsprint, wallpaper, jute sacking, fiberplate, a composite material called gator board, feather board, handmade paper, and acrilivin. He has used painted and/or drawn with oil, acrylic, encaustic, Lascaux acrylic, casein, enamel, pastel, oil pastel, graphite, guache, and enamelac. Ryman has also experimented with printmaking, creating etchings, aquatints, lithographs, and silkscreens. His most famous quote is "There is never any question of what to paint only how to paint."