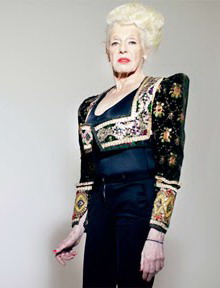 Josephine Gail Baer (born August 7, 1929) is an American painter whose works are associated with minimalist art. She began exhibiting her work at the Fischbach Gallery, New York, and other venues for contemporary art in the mid-1960s. In the mid-1970s, she turned away from non-objective painting. Since then, Baer has fused images, symbols, words, and phrases in a non-narrative manner, a mode of expression she once termed "radical figuration."

She was born Josephine Gail Kleinberg into an upper-middle-class family. Her mother, Hortense Kalisher Kleinberg, a commercial artist, was a fierce proponent of women's rights and imbued her daughter with a sense of independence. Her father, Lester Kleinberg, was a successful commodities broker in hay and grain. Baer studied art as a child at the Cornish College of the Arts, but because her mother wanted her to become a medical illustrator, she majored in biology at the University of Washington, Seattle, which she attended from 1946-1949. She dropped out of school in her junior year to marry a fellow-student at the University, Gerard L. Hanauer.

The marriage was over quickly, and in 1950, Baer went to Israel to explore the realities of rural socialism on various kibbutzim for a few months. Returning to New York City, from 1950–53 she did the course work for a master's degree in psychology at the New School for Social Research. Baer went to school at night, while during the day she was employed by an interior design studio as a draftsman and secretary.

Baer moved to Los Angeles in 1953 and shortly afterwards married Richard Baer, a television writer. Their son, Joshua Baer, who became an art dealer, writer, and consultant, was born in 1955; the couple was divorced in the late 1950s. During this time Baer began to paint and draw for the first time since adolescence, becoming friends with Edward Kienholz and other local artists in the orbit of the Ferus Gallery. She met the painter John Wesley, to whom she was married from 1960-1970. She, Wesley, and Joshua moved to New York in 1960, where Baer lived until 1975. After separating from Wesley, she was in a long-term relationship with the sculptor Robert Lawrance Lobe.

Baer's work of the late 1950s emulated paintings by members of the New York School, particularly Arshile Gorky, Robert Motherwell, Clyfford Still, and Mark Rothko. Rothko, she observed, "gave me permission to work with a format." Jasper Johns's paintings and sculpture also made an immediate impression, because they suggested "how a work should be the thing itself."

In 1960 Baer rejected Abstract Expressionism for spare, hard-edge non-objective painting. Two early important paintings in this style were Untitled (Black Star) (1960-1961; Kröller-Müller Museum, Otterlo) and Untitled (White Star) (1960-1961; Kröller-Müller Museum, Otterlo). She then introduced an even more pared-down format: the image was excised and the central area of the canvas became completely white. In 1962 Baer began the Korean series, a group of sixteen canvases. The Koreans were given their name by the art dealer Richard Bellamy, who said that Baer's paintings were just as unknown as Korean art was to most Westerners. The Koreans were composed of a dominant field of densely painted white enclosed by bands of sky blue and black that seem to shimmer and move: this optical illusion underscored Baer's focus on "the notion of light." Baer ascribed her inspiration for the Koreans to Samuel Beckett's novel The Unnamable, which she was reading at the time. His observations about osmosis and diffusion through membranes influenced her to examine the properties of boundaries between spaces. In many works that Baer created between 1964 and 1966, the peripheries and edges of the canvas continued to be marked by two square or rectangular bands of color. The outer, thicker border was black; inside it, a thinner band was painted in another color, such as red, green, lavender, or blue. Baer summed up the artistic concerns of her own work in 1971, writing, "Non-objective painting's language is rooted, nowadays, in edges and boundaries, contours and gradients, brightness, darkness and color reflections. Its syntax is motion and change." Baer was accepted as a peer in the burgeoning Minimalist movement by such artists as Sol LeWitt, Donald Judd, and Dan Flavin. In 1964 Flavin organized "Eleven Artists," an exhibition that was an important step in defining the key figures of Minimalism. He included Baer, along with Judd, Flavin, LeWitt, Ward Jackson, Frank Stella, Irwin Fleminger, Larry Poons, Walter Darby Bannard, Robert Ryman, Leo Valledor, and himself. In 1966 Baer's first one-person show took place at the Fischbach Gallery, then a center for avant-garde art. That year she was also represented in both "Systemic Painting," a survey exhibition of contemporary geometric abstraction at the Solomon R. Guggenheim Museum in New York, and "10," a group exhibition at the Virginia Dwan Gallery co-curated by Ad Reinhardt and Robert Smithson that further enshrined its participants as canonical for Minimalism. Besides Baer, Reinhardt, and Smithson, the other artists selected were Carl Andre, Judd, LeWitt, Flavin, Robert Morris, Michael Steiner, and Agnes Martin. Baer's works shown in these exhibitions, which included vertical and horizontal single, diptych, and triptych paintings, established her avant-garde reputation in the New York art world.