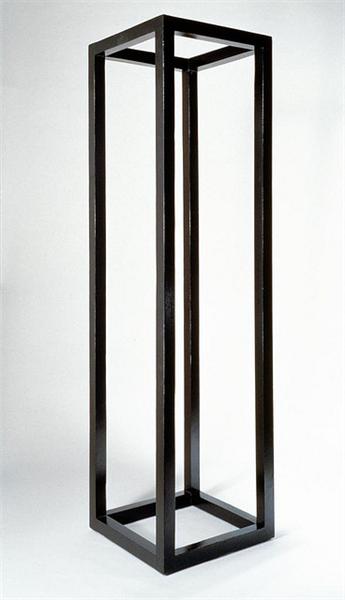 In visual arts, music, and other mediums, minimalism is a style that uses pared-down design elements.

Minimalism began in post–World War II Western art, most strongly with American visual arts in the 1960s and early 1970s. Prominent artists associated with minimalism include Donald Judd, John McCracken, Agnes Martin, Dan Flavin, Robert Morris, Anne Truitt, and Frank Stella. It derives from the reductive aspects of modernism and is often interpreted as a reaction against abstract expressionism and a bridge to postminimal art practices.

Minimalism in music often features repetition and iteration such as those of the compositions of La Monte Young, Terry Riley, Steve Reich, Philip Glass, and John Adams. The term minimalist often colloquially refers to anything that is spare or stripped to its essentials. It has accordingly been used to describe the plays and novels of Samuel Beckett, the films of Robert Bresson, the stories of Raymond Carver, and the automobile designs of Colin Chapman. The word was first used in English in the early 20th century to describe "a 1913 composition by the Russian painter Kasimir Malevich of a black square on a white ground".

Minimalism in visual art, generally referred to as "minimal art", "literalist art" and "ABC Art" emerged in New York in the early 1960s as new and older artists moved toward geometric abstraction; exploring via painting in the cases of Frank Stella, Kenneth Noland, Al Held, Ellsworth Kelly, Robert Ryman and others; and sculpture in the works of various artists including David Smith, Anthony Caro, Tony Smith, Sol LeWitt, Carl Andre, Dan Flavin, Donald Judd and others. Judd's sculpture was showcased in 1964 at Green Gallery in Manhattan, as were Flavin's first fluorescent light works, while other leading Manhattan galleries like Leo Castelli Gallery and Pace Gallery also began to showcase artists focused on geometric abstraction. In addition there were two seminal and influential museum exhibitions: Primary Structures: Younger American and British Sculpture shown from April 27 - June 12, 1966 at the Jewish Museum in New York, organized by the museum's Curator of Painting and Sculpture, Kynaston McShine and Systemic Painting, at the Solomon R. Guggenheim Museum curated by Lawrence Alloway also in 1966 that showcased Geometric abstraction in the American art world via Shaped canvas, Color Field, and Hard-edge painting. In the wake of those exhibitions and a few others the art movement called minimal art emerged.

In a more broad and general sense, one finds European roots of minimalism in the geometric abstractions of painters associated with the Bauhaus, in the works of Kazimir Malevich, Piet Mondrian and other artists associated with the De Stijl movement, and the Russian Constructivist movement, and in the work of the Romanian sculptor Constantin Brâncuși.

In France between 1947 and 1948, Yves Klein conceived his Monotone Symphony (1949, formally The Monotone-Silence Symphony) that consisted of a single 20-minute sustained chord followed by a 20-minute silence – a precedent to both La Monte Young's drone music and John Cage's 4′33″. Although Klein had painted monochromes as early as 1949, and held the first private exhibition of this work in 1950, his first public showing was the publication of the Artist's book Yves: Peintures in November 1954.