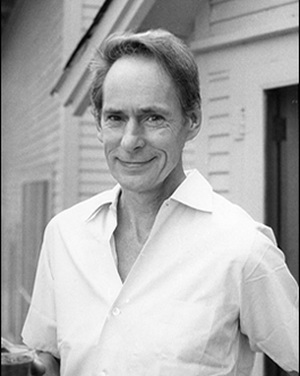 Ronald Bladen (1918- 1988) was an American painter and sculptor. He is particularly known for his large-scale sculptures. His artistic stance, was influenced by European Constructivism, American Hard-Edge Painting, and sculptors such as Isamu Noguchi and David Smith. Bladen in turn had stimulating effect on a circle of younger artists including Carl Andre, Donald Judd, Sol LeWitt and others, who repeatedly referred to him as one of the ‘father figures’ of Minimal Art.

Charles Ronald Wells Bladen was born on July 13, 1918, to Muriel Beatrice Tylecote and Kenneth Bladen, both British immigrants living in Vancouver, Canada. His mother studied at the Sorbonne in Paris and was active as part of the suffragette movement. In 1922 the family moved to the Washington state before returning to Canada to live in Victoria British Columbia in 1932. The artist displayed his love of and capacity for art at a young age. At ten years old Bladen began drawing intensively, making copies of works by Titian, Picasso and Matisse. In 1937 the artist enrolled in the Vancouver School of Art where he studied until 1939.

In 1939 the artist moved to San Francisco where he enrolled in the California School of Fine Arts. In 1941, when drafted and subsequently declared unfit for service, the artist was obliged to work as a ship’s welder at the navy dockyards. This training proved invaluable. Using the skills he learned in this capacity the artist supported him for many years as a toolmaker.

In 1946 Bladen traveled to Tijuana, Mexico, New Orleans and New York on a grant from the San Francisco Art Association. In 1948 he was married to the actress Barbara Gross. They separated in 1955 and he moved into a communal household with poet Michael McClure, and painter Al Held, who would remain a lifelong friend. During this time he also befriended the writers Jack Kerouac, Henry Miller and Allen Ginsberg.

In 1956, Bladen moved to New York where he lived on Houston Street. Through Al Held he met George Sugarman and Nicholas Krushenick and John Krushenick, who together founded the Brata Gallery co-operative in 1957. The artist’s paintings from this period mark a departure from his earlier romantic works. They are defined by highly concentrated segments of color set against monochromatic backgrounds. In 1960, he took over Al Held’s studio at 5 west 21st Street, where he began to focus on making collages of folded paper and large scale plywood relief paintings. In 1962, he exhibited his plywood paintings for the first time at the Brata Gallery and the Green Gallery in New York. The following year he made his first free-standing, colored sculptures from plywood boards with metal struts. From this time on the artist dedicated himself exclusively to sculpture. In 1964, he showed his first sculpture, White Z, at an exhibition in the Park Place Gallery in New York where he befriended Connie Reyes, who later became his companion. He was awarded the National Medal of Arts by the National Endowment of the Arts. In 1966, he showed a tripartite work made the previous year, Three Elements, at the exhibition, Primary Structures Younger American and British Artists, in the Jewish Museum in New York. A seminal moment in the history of sculpture, this exhibition brought the language of minimal sculpture into the public eye. Artists represented in the exhibition include Carl Andre, Dan Flavin, Donald Judd, Sol LeWitt, Walter De Maria Robert Morris and others. In 1967 he was included in the Scale as Content exhibition at the Corcoran Gallery of Art in Washington, which brought together important sculptures by Ronald Bladen, Barnett Newman and Tony Smith, he showed his monumental sculpture, The X. In 1968, Bladen was awarded the John Simon Guggenheim Memorial Foundation Fellowship, was represented at documenta 4 in Kassel, and was among the circle of artists presented to a European art public under the title, Minimal Art, West Berlin. Starting in 1967 he received a number of important public commissions including: The Cathedral Evening, 1969 for city of Albany (New York), Vroom Sh-Sh-Sh in 1974 for Buffalo (New York), and Raiko I in 1975 for Galerie Schmela in Düsseldorf.