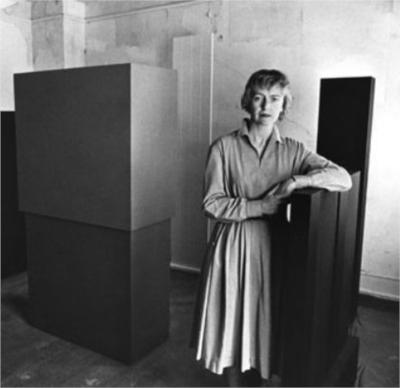 Anne Truitt was a major American artist of the mid-20th century; she is associated with both minimalism and Color Field painting.

Truitt graduated from Bryn Mawr College with a degree in psychology in 1943. She was married to James Truitt in 1948 (they divorced in 1969), and she became a full-time artist in the 1950s. She made what is considered her most important work in the early 1960s anticipating in many respects the work of minimalists like Donald Judd and Ellsworth Kelly. However, she was unlike minimalists in some significant ways.

Truitt's first wood sculpture, titled "First" (1961), consists of three white vertical slates rooted in a block ground, each coming to a point and braced to each other at the rear, resembling a fragment of a picket fence.

The sculpture that made her significant to the development of Minimalism were aggressively plain and painted structures, often large. The recessional platform under her sculpture raised them just enough off the ground that they appeared to float on a thin line of shadow. The boundary between sculpture and ground, between gravity and verticality, was made illusory. This formal ambivalence is mirrored by her insistence that color itself, for instance, contained a psychological vibration which when purified, as it is on a work of art, isolates the event it refers to as a thing rather than a feeling. The event becomes a work of art, a visual sensation delivered by color. Her first solo exhibition was in 1963 at the André Emmerich gallery, and in many senses her work also hews to what was emerging there. She was one of only three women included in the influential 1966 exhibition, Primary Structures at the Jewish Museum in New York. In Washington her work was represented by Pyramid Gallery which later became the Osuna Gallery.

Truitt is also known for three books she wrote, Daybook, Turn, and Prospect, all journals. For many years she was associated with the University of Maryland, College Park, where she was a professor, and the artists' colony Yaddo, where she served as interim president.

The Estate of Anne Truitt is represented by Matthew Marks Gallery in New York and Stephen Friedman Gallery in London.