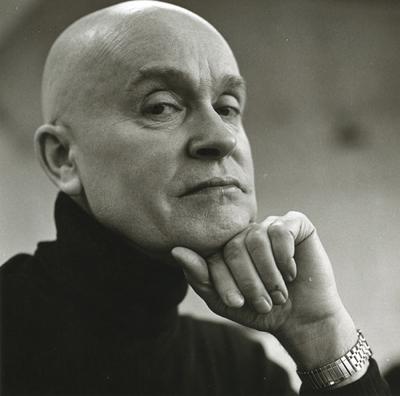 Gene Davis was one of the most important painters associated with the Washington Color School and, in general, with the so-called "Post-Painterly Abstraction" (term coined by critic Clement Greenberg), movement largely derived from Abstract Expressionism. Davis is well-known for his signature style that makes use of (often brightly-colored) vertical stripes.

Gene Davis (August 22, 1920 - April 6, 1985) was an American Color Field painter known especially for his paintings of vertical stripes of color.

Davis was born in Washington D.C. in 1920 and spent nearly all his life there. Before he began to paint in 1949, he worked as a sportswriter, covering the Washington Redskins and other local teams. Working as a journalist in the late 1940s, he covered the Roosevelt and Truman presidential administrations, and was often President Truman's partner for poker games. His first art studio was in his apartment on Scott Circle; later he worked out of a studio on Pennsylvania Avenue.

Davis's first solo exhibition of drawings was at the Dupont Theater Gallery in 1952, and his first exhibition of paintings was at Catholic University in 1953. A decade later he participated in the "Washington Color Painters" exhibit at the Washington Gallery of Modern Art in Washington, DC, which traveled to other venues around the US, and launched the recognition of the Washington Color School as a regional movement in which Davis was a central figure. The Washington painters were among the most prominent of the mid-century color field painters. Though, he worked in a variety of media and styles, including ink, oil, acrylic, video, and collage, Davis is best known by far for his acrylic paintings (mostly on canvas) of colorful vertical stripes, which he began to paint in 1958. The paintings typically repeat particular colors to create a sense of rhythm and repetition with variations. One of the best-known of his paintings, "Black Grey Beat" (1964), owned by the Smithsonian American Art Museum reinforces these musical comparisons in its title. The pairs of alternating black and grey stripes are repeated across the canvas, and recognizable even as other colors are substituted for black and grey, and returned to even as the repetition of dark and light pairs is here and there broken by sharply contrasting colors.

In 1972 Davis created Franklin's Footpath, which was at the time the world's largest artwork, by painting colorful stripes on the street in front of the Philadelphia Museum of Art, and the world's largest painting, Niagara (43,680 square feet), in a parking lot in Lewiston, NY. His "micro-paintings", at the other extreme, were as small as 3/8 of an inch square.

For a public work in a different medium altogether, he designed the color patterns of the "Solar Wall," a set of tubes filled with dyed water and backlit by fluorescent lights, at the Muscarelle Museum of Art at the College of William and Mary in Williamsburg, Virginia.

Davis began teaching in 1966 at the Corcoran School of Art, where he became a permanent member of the faculty. His works are in the collections of, among others, the Corcoran Gallery of Art, the Solomon R. Guggenheim Museum, The Phillips Collection in Washington, DC, the Walker Art Center in Minneapolis, MN, and the Smithsonian American Art Museum.