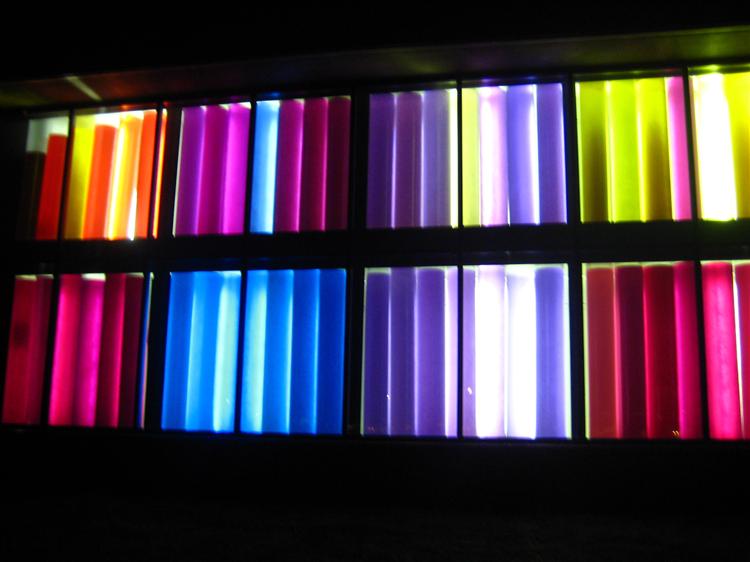 The outside "solar wall" of the Muscarelle Museum of Art at the College of William & Mary in Williamsburg, Virginia, USA during the night. The title Sun Sonata denotes both the rhythmic pattern of colors illuminated at night and the wall’s function as a solar energy collection system by day. The genesis of this remarkable combination of aesthetics and function dates to the early 1980s when plans were being drawn for the Museum. Carlton Abbott, the Museum’s architect, suggested that the solar wall tubes could be colored, prompting the commission of Davis, an eminent painter of the Washington Color School, to transform the solar wall into a work of art. Davis was a natural choice for this commission, as the artist had achieved an international reputation for his abstract paintings which characteristically consisted of vertical bands of colors. The vertical solar tubes offered a linear aesthetic similar to that of the artists’ stripe paintings, while also providing an unusual and challenging artistic medium.

The large scale of the Museum’s solar wall, measuring sixty-five by thirteen feet, proved to be no obstacle to Davis, who had once created a work of art by painting a quarter of a mile of pavement in front of the Philadelphia Museum of Art. The plan for the façade of the new Muscarelle Museum of Art involved the use of 124 reinforced fiberglass tubes, which were each to be filled with dyed water wand illuminated by fluorescent lights from behind. Davis experimented with a number of designs, which can be found in his notebook now in the Museum’s collection, before making his choice for the first configuration of colors. In accordance with the artist’s selected sequence, colored dye was systematically placed in the solar wall tubes and the Sun Sonata came to life with the opening of the Museum in 1983. Since then, subsequent color arrangements have been derived from the original sketch book by Davis.

The artist’s arrangement of individual colors is often compared to the coordination of various notes in a piece of music. Davis’s chosen title of Sun Sonata for the solar wall further underscores the affinity seen between his compositions and those of composers of music. As Davis himself once explained, “My work is mainly about intervals, that is, like in music. Music is essentially time interval, and I’m interested in space interval.” The nature of Davis’s creative process is such that his works cannot be fully perceived or appreciated “in one glance,” and Sun Sonata stands as a vivid illustration of the artist’s words. Beyond its initial impact, a compelling energy entices the viewer to make a careful examination of the single notes of colors. Then, the multitude of the color juxtapositions makes clear Davis’s ability to take a simple and economical form – the colored stripe – and orchestrate it into a powerful visual symphony.