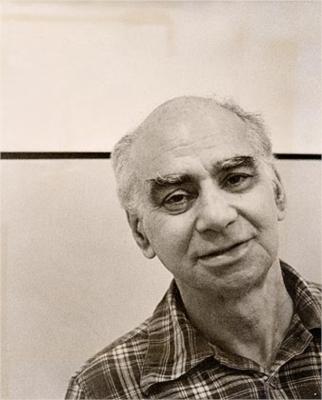 Born in Philadelphia, Leon Berkowitz is best known as a Washington painter, having spent more than forty years in this city. Berkowitz studied at the University of Pennsylvania, the Art Students League in New York, and in Paris, Florence, and Mexico City. During World War II he was in the Army, stationed in Virginia, and in 1945, after completing his military service, he moved to Washington, D.C. He painted and taught art for more than ten years in D.C. high schools and later, in 1969, at The Corcoran Gallery’s School of Art, where he was chairman of the painting department. He continued to teach there for almost twenty years, until his death in 1987.

With his first wife, the poet Ira Fox Berkowitz, Leon Berkowitz established the Washington Workshop Center for the Arts in 1945. This Center became a cultural catalyst in the city, bringing together leaders in both the performing and visual arts, including painters such as Morris Louis, Kenneth Noland, and Gene Davis, who would later become well-known founders of the Washington Color School group. The Workshop Center closed in 1956, and Berkowitz and his wife spent much of the next decade traveling and living abroad, primarily in Spain and Wales. It was during this sabbatical from his life in Washington that his painting took a new direction, and it is this late work for which he is best known.

By the 1970s, Berkowitz’s paintings had become completely abstract, suffused with mists of color and light. Though he was often associated with the Color School painters, he vigorously denied that connection, asserting instead that his floating washes of color carried light, and through light, a spiritual presence. And, indeed, the intense white ground used to prime his canvases radiates light, creating a luminous, color-drenched atmospheric effect. In a statement for an exhibition of his work at The Phillips Collection in 1976 he said, “I am endeavoring to find that blush of light over light and the color within the light; the depths through which we see when we look into and not at color.”