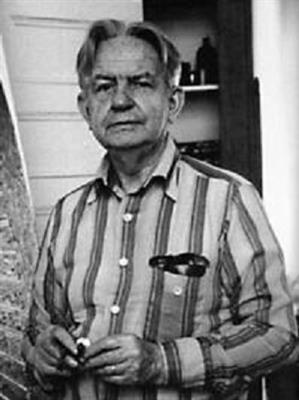 Alfred Julio Jensen was an abstract painter. His paintings are often characterized by grids of brightly colored triangles, circles or squares, painted in thick impasto. Conveying a complex web of ideas, often incorporating calligraphy or numerical systems, they are frequently referred to as "concrete" abstract art. After his death in 1981, the Guggenheim organized a major retrospective of his work, having held his solo exhibition there in 1961.

Alfred Jensen was born in Guatemala City, Guatemala on December 11, 1903. His father Peter was a Danish entrepreneur, and his mother Anna a German-Pole governess working for a French family. Upon his mother's death in 1910, the seven-year-old was sent to Horsholm, Denmark to live with his uncle. After graduating from elementary school in Denmark in 1917, Jensen traveled extensively working as a ship's cabin boy—drawing portraits of the passengers and crew. Between 1921 and 1923, he worked as a cowboy and chicken farmer between San Diego and then Guatemala, before returning to San Diego. There he worked as a lumber salesman, while attending San Diego High School at night and then receiving a scholarship to the San Diego Fine Arts School at Balboa Park.

In 1926, he traveled to Munich, Germany to study under Hans Hofmann, an abstract expressionist painter who trained numerous well known artists at his schools in Germany and the United States. There he met fellow student Saidie Adler May, a wealthy art collector. For the next 34 years, she was a patron of his work, and he accompanied her in extensive travels, together studying the masters throughout Europe and collecting works by artists such as Paul Klee, Wassily Kandinsky, Theo van Doesburg, William Baziotes, Jackson Pollock, Robert Motherwell, Naum Gabo and Fritz Glarner. In 1951, upon her death, the collection was divided among the Baltimore Museum of Art, San Diego Museum of Art and the Museum of Modern Art in New York.

In 1929, he moved to Paris to study at the Academie Scandinave, learning modern sculpture under Charles Despiau, and painting under Othon Friesz and Charles Dufresne, who becomes Jensen's "spiritual and painter-father."

He moved to the US in 1934, continuing to travel and study with Saidie May, while advising her collecting. Around 1945, he began his 20-year study of Goethe's Zür Farbenlehre, the poet's views on the nature of colours and how they are perceived by humans—considered an origination of Color Theory. In 1951, he settled in New York, opening a studio in the Lincoln Arcade, and began to paint in an abstract expressionist style.

Throughout his life, Jensen met and collaborated with many already or subsequently influential artists, most notably Mark Rothko, Sam Francis, Jean Dubuffet, Joan Miró, and Allan Kaprow, and held exhibitions with contemporaries including Ulfert Wilke, Robert Becker, Sally Hazelet, Franz Kline, Joseph Cornell, Willem de Kooning and Robert Rauschenberg. A well traveled citizen of the world, he spoke five languages and similarly refused to settle into any one artistic movement, remaining a challenge to categorize—as noted by Peter Schjeldahl in his essay “Jensen’s Difficulty”.