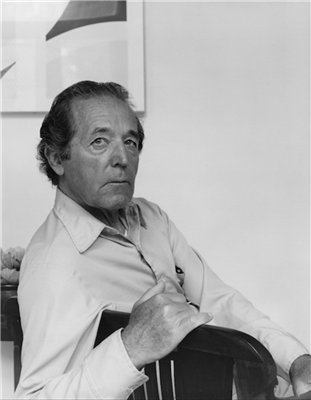 Daphnis served in the United States Army from 1942 to 1945. During his service he was asked to put his skills as a painter to use and created camouflage for use on enormous military relief maps. It is speculated by some art critics that it was while painting camouflage that Daphnis developed the signature flatness later recognizable in his abstract geometric paintings.

While Daphnis is generally regarded as a self-taught artist, he did pursue some formal training. Following his military service, Daphnis trained at the Art Students League of New York. From 1949-1951, Daphnis studied in Paris. From 1951-1952, he continued his studies at the Istituto Statale D'Arte in Firenze, Italy. In 1952 he returned again briefly to Paris for additional study.

Daphnis' artistic style evolved throughout his career. He began as a realist and following the war, moved on to biomorphic forms with a Surrealist influence.

From March 24-April 11, 1947, Daphnis had an eponymous solo exhibition at the Contemporary Arts Gallery at 106 E 57th St, New York at which his biomorphic paintings were featured. The exhibition included both oil paintings and watercolors. It was his second show at the gallery and in his catalog essay, art historian Gordon B. Washburn found new promise in the works: "There is hardly one of them, nevertheless, which in its far distances or on its horizon, has failed to keep a promise of renewed life and ultimate happiness. Once, in his youthful years, Daphnis painted a vision of heaven and hell; but in those days his purgatory was as charming as his paradise, the devils a toy army. A new definition of good and evil has now been found, and in returning to a world of greater hope and faith he seizes the beauty of the natural world - especially its plant-life whose forms he has always deeply loved - with a thicker complex of emotions. His self-taught art, once picked out with one finger, its tunes like those heard on a sweet but lonely hillside from a shepherd's flute, are not polyphonic. Planning, close organization, and definition enter the pictures; and with those controls comes an abstraction which is increasing."

In a 1985 exhibition review, Grace Glueck described these works for the New York Times:

"Before developing his reductive line-color-plane approach...Daphnis was involved with biomorphic imagery. Part of his inspiration came from a botanical hobby: hybridizing tree peonies, an avocation he pursues to this day. At Kouros, a group of rarely seen canvases and watercolors from 1947-48 deals with organic, floral and undersea forms, in poetic compositions of luminous color. Despite their amorphous look, they have a well-ordered structure that doesn't seem too far removed from the artist's later concerns. In one of the strongest - called, in fact, Hybridization - plant leaves and stems, bathed in a shimmering light, are beautifully locked in a harmonious balance of shapes and hues."