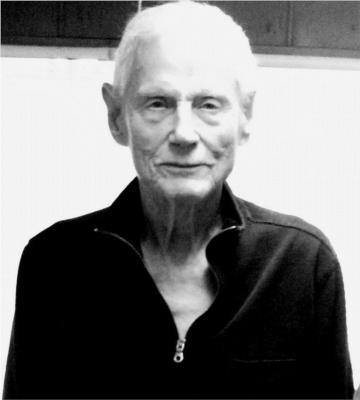 Paul (Allen) Reed (March 28, 1919 – September 26, 2015) was an American artist most associated with the Washington Color School and Color Field Painting.

At the time of his death in 2015 Reed was the last living member of the Washington Color School - an art group that gained national fame in the 1960s. Paul Allen Reed was born in Washington, DC in 1919 and attended McKinley High School. Reed moved to San Diego for college, but soon returned to DC to accept a job at The Washington Times-Herald in 1937 working in the graphics department masking out half-tones in advertisements. At the same time, he took art courses at the Corcoran School of Art during the day. Graphic design jobs would then take him to Atlanta and New York before Reed established himself permanently in DC in 1952. Reed worked as a freelance graphic designer throughout the 1950s to have the flexibility to paint and visit museums and galleries. In 1962 Reed joined the staff of the Peace Corps as a graphic designer in charge of all publication design.

Reed had his first solo exhibition at the Adams-Morgan Gallery in Washington, DC in January 1963. The paintings, executed in water-based acrylic paint on unprimed canvas, were characterized by a centralized image, often with a centrifugal motion within the petal-like shapes. Reed’s next solo exhibition was at the East Hampton Gallery in New York in November of the same year. In the New York exhibition, the centrifugal force of the earlier paintings had now spun off a smaller companion painting that hovered a set distance away. Reed called these works his Satellite Paintings and they questioned the relation of a painting to the wall. Further exhibitions were held in New York at East Hampton Gallery in 1964 and 1966, the Bertha Schaefer Gallery in 1967 and 1971, and in DC at the Jefferson Place Gallery in 1964 and Pyramid Gallery in 1971 and 1973.

Reed was methodical in his painting, his works fall into considered series; as he developed and refined an idea. The last work of a series is usually the largest, most complex, or has the greatest clarity. In 1965 Reed created his well-known series- the Disk paintings - where two corners of different color are set off by a diagonal band with a large circle at its center. With these works Reed blended colors by overlapping layers of separate colors, something that was distinct to the new water-based acrylic paints then available. Next Reed created compositions of zigzagging stripes where each line kept its pure color yet created secondary colors at each bend in the Upstart series of 1965. Further color overlapping was explored with the “plaid” effect of grids in the series Interchange, Inside Out, and Coherence of 1966. One of Reed’s Coherence paintings belonging to the permanent collection of the National Gallery of Art was recently on view there. Within the Washington Color School, Reed was recognized as the most successful at using the transparency new acrylic paints offered to overlap colors, something Morris Louis (1912-1962) had explored in his Veil paintings but abandoned as he could not achieve the vibrancy he desired with the first generation of acrylic paints, Magna.