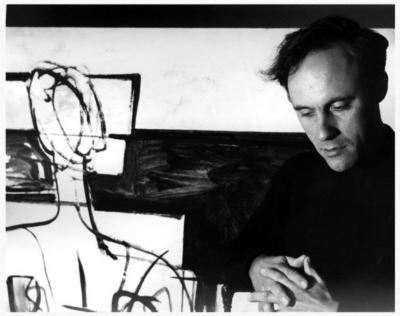 Patrick Heron was an English painter, writer and designer, based in St. Ives, Cornwall. Born at Headingley, Leeds in Yorkshire in 1920, he was the son of Thomas Milner Heron and Eulalie 'Jack' Heron (née Davies), the first of four children (Michael, Joanna and Giles). His father was a clothes manufacturer, pacifist, socialist and leading member of the Leeds Arts Club. He attended St. George's School in Harpenden and on a school visit to the National Gallery, London in 1933 saw paintings by Paul Cézanne for the first time. He immediately began to paint in a Cézanne-influenced style. Shortly after this he was asked to make designs for Cresta Silks and continued to design for Cresta until 1951. When he was 17 he attended The Slade School of Art for two days a week, returning to the West Country to draw the landscape. In World War II he registered as a conscientious objector and worked as an agricultural labourer for three years, then at the Leach Pottery at St Ives in 1944–45, where he met Ben Nicholson, Barbara Hepworth and many other leading artists of the St Ives School. He had just seen Matisse's The Red Studio, exhibited at the Redfern Gallery, London and soon after this completed what he later considered to be his first mature work, The Piano in 1943.

The George Braque exhibition at the Tate Gallery in 1946 deeply impressed him and he wrote an essay on Braque for The New English Weekly. Then up to 1953 he spent time in Europe visiting Paris, Provence and Italy. Heron visited Braque in his Paris studio and presented him with the New English Weekly article. His first one-man exhibition was at the Redfern Gallery in London in 1947. In 1953 he organised, wrote the catalogue and exhibited in Space in Colour, an exhibition of ten contemporary artists, at Hanover Gallery, London. Following this he exhibited twelve paintings at the Il Bienal di São Paulo, Brazil. The same year he began teaching at Central School of Arts and Crafts in London and continued there until 1956. In 1956 he saw, and praised highly the American Abstract Expressionists who showed their work for the first time in England at the Tate Gallery. He was inspired by this group of eight painters, their confidence and the large scale and flatness.

A development towards abstraction had been evident in his paintings, for example, Square Leaves (1952) and Winter Harbour (1955) The effect on Heron of the New York painters, together with his move to live at Eagles Nest, overlooking the cliffs at Zennor, that year was a pivotal point in the transformation into his now characteristic language of interlinking forms; his balancing of colour and space. Heron's deepest influences were Braque, Matisse and Bonnard and he was connected first of all to the pure abstraction of European lineage, represented by Naum Gabo and Pierre Soulages.

He continued painting until the day before he died. He died peacefully at his home in Zennor, Cornwall, on 20 March 1999 at the age of 79. He was survived by both his daughters, Katharine Heron, now an architect, and Susanna Heron, a sculptor.

Patrick Heron CBE (30 January 1920 – 20 March 1999) was a British abstract and figurative artist, writer, and polemicist, who lived in Zennor, Cornwall.

Patrick Heron (b. 1920, Leeds, England; d. 1999, St Ives, England) was a British artist and critic recognised as one of the leading painters of his generation. Influenced by Cezanne, Matisse, Braque and Bonnard, Heron made a significant contribution to the dissemination of modernist ideas of painting through his critical writing and primarily his art.

Heron's artworks are most noted for his exploration and use of colour and light. He is known for both his early figurative work and non-figurative works, which over the years looked to explore further the idea of making all areas of the painting of equal importance. His work was exhibited widely throughout his career and while he wrote regularly early in his career, notably for New Statesman and Arts New York, this continued periodically in later years.

Born 30 January 1920 at Headingley, Leeds in Yorkshire, Heron was the eldest child of Thomas [Tom] Milner Heron and Eulalie 'Jack' Heron [née Davies]. The family moved to Cornwall where Heron was five where Tom joined Alec Walker at Crysede to manage and expand the business from artist-designed wood-block prints on silk to include garment-making and retail. The family moved again in 1929 to Welwyn Garden City where Tom established Cresta Silks. Notable designers including Edward McKnight Kauffer and Wells Coates, Paul Nash and Cedric Morris worked with Cresta, and Heron also created fabric designs for the firm from his teenage years. At school, Heron met his future wife Delia Reiss, daughter of Celia and Richard Reiss, a director of the company that founded Welwyn Garden City.

Registered as a conscientious objector in World War II, Heron worked as an agricultural labourer in Cambridgeshire before he was signed off for ill health. He returned to Cornwall to work for Bernard Leach at the Leach Pottery, St Ives, in 1944-45. During this time, he met many leading artists of the St Ives School, including Barbara Hepworth and Ben Nicholson. Reacquainted with Cornwall, Heron spent each summer there until it became his permanent home in 1956 after his purchase and refurbishment of Eagles Nest the year before from Mark Arnold-Forster, a house Heron had lived in during his childhood. He would spend the rest of his life here, until he died at home in March 1999.

Patrick and Delia married in 1945 and had two daughters, architect and educator Katharine [born 1947] and Susanna [born 1949], a sculptor.

Heron was awarded a CBE in 1977 under Harold Wilson, but rejected a knighthood under Margaret Thatcher.

Heron's early works were strongly influenced by artists including Matisse, Bonnard, Braque and Cezanne. Throughout his career, Heron worked in a variety of media, from the silk scarves he designed for his father’s company Cresta from the age of 14, to a stained-glass window for Tate St Ives, but he was foremost a painter working in oils and gouache.

Heron first saw the paintings of Paul Cézanne at an exhibition at the National Gallery in 1933, an influence which continued throughout his career. Having seen The Red Studio by Matisse (one of his other significant influences) at the Redfern Gallery in 1943, Heron completed The Piano, which he considered to be his first mature work. His first solo exhibition was held in 1947 at the Redfern Gallery, London. That same year, Heron began a series of portraits of TS Eliot, one of which was acquired by the National Portrait Gallery in 1966. In 2013 this highly abstracted portrait was the centre of an exhibition at the gallery, displayed for the first time alongside a selection of Heron’s original studies from life and memory from which it was produced.