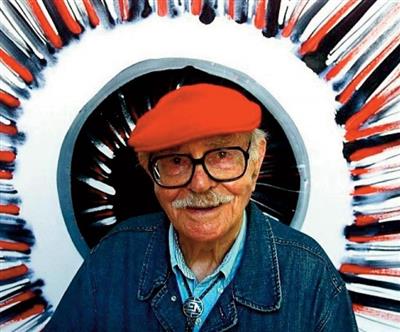 Sir Terry Frost RA (born Terence Ernest Manitou Frost) (13 October 1915 – 1 September 2003) was an English abstract artist, who worked in Newlyn, Cornwall. Frost was renowned for his use of the Cornish light, colour and shape to start a new art movement in England. He became a leading exponent of abstract art and a recognised figure of the British art establishment.

Born in Leamington Spa, Warwickshire, in 1915, he did not become an artist until he was in his 30s. He left school aged fourteen and went to work at Curry's cycle shop and then at Armstrong Whitworth in Coventry. During World War II, he served in France, the Middle East and Greece, before joining the commandos. Whilst serving with the commandos in Crete in June 1941 he was captured and sent to various prisoner of war camps. As a prisoner of war at Stalag 383 in Bavaria, he met Adrian Heath who encouraged him to paint. Commenting later he described these years as a 'tremendous spiritual experience, a more aware or heightened perception during starvation'.

As soon as war was over he went to Birmingham College of Art. However Frost quickly assumed that the action was elsewhere. At first attended Camberwell School of Art under Leonard Fuller. The following year, 1946 he removed for a year out to St. Ives School of Painting where his first solo exhibition was held in 1947 at G.B. Downing's bookshop, before returning to London and that autumn the Camberwell School of Art under Victor Passmore, Ben Nicholson and William Coldstream bringing him to paint his first abstract work in 1949. For three years he exhibited with the St Ives Society of Artists until in 1950 he was elected a member of the Penwith Society; he maintained a permanent connection with the Newlyn school. Already settled in the town by 1951 he worked as an assistant to the sculptor Barbara Hepworth. He was joined there by Roger Hilton, where they began a collaboration in collage and construction techniques.

His first exhibition was the Leicester Galleries in the heart of London's West End. Frost's academic career included teaching at Bath Academy of Art, the Coventry Art College and was appointed on the recommendation of Herbert Read as the Gregory Fellow on Painting (1954-1956) at the University of Leeds. There he befriended the painter Stass Paraskos, who would later invite Frost to spend time working and teaching in Cyprus at the Cyprus College of Art.

In 1958 while still living in Leeds and teaching at Leeds School of Art he joined the London Group. He moved to St Ives, and then in 1963 to Banbury, where his house at 2 Old Parr Street now sports an Oxfordshire Blue Plaque.

Later he became Artist in Residence and Professor of Painting at the Department of Fine Art of the University of Reading.

At the Barbara Schaeffer Society in New York, 1960 he put on his first exhibition in USA. There he met many of American abstract expressionists, including Marc Rothko who, along with his wife Mel, became great friends. The success contributed to an award of the John Moore Prize for 1965. In 1992 he was elected a Royal Academician and he was knighted in 1998. A retrospective of his work was held in 2000.