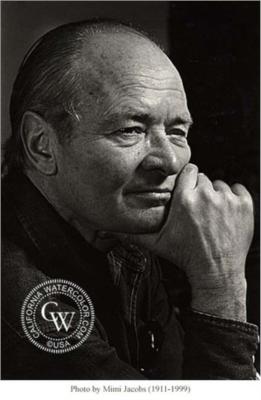 Elmer Nelson Bischoff (July 9, 1916 – March 2, 1991) was a visual artist in the San Francisco Bay Area. Bischoff, along with Richard Diebenkorn and David Park, was part of the post-World War II generation of artists who started as abstract painters and found their way back to figurative art.

Elmer Bischoff, second child of John and Elna (née Nelson) Bischoff, grew up in Berkeley, California, the second-generation Californian son of a father of German descent and a mother of mixed Swedish-Ecuadoran origin.

He entered the University of California, Berkeley, in September 1934, completing his master's degree in May 1939, and immediately started teaching art at Sacramento High School (1939–41). During his years at university, one teacher had influenced him most: the highly independent-minded Margaret Peterson, whose total dedication to her teaching, and insistence on the ethical value of art, were to have a great impact on the artist Elmer Bischoff would be. World War II, however, was to change Bischoff's life. In 1941, he served as a lieutenant colonel in intelligence services in England, stationing near Oxford, and only coming back to the US in November 1945.

After the war, back in San Francisco, Bischoff found himself once more in the midst of avant-garde artistic ebullience - mixing, among other painters (and to name but two), with such artists as Mark Rothko and Clyfford Still. In January 1946, a golden opportunity was offered him: one of his artist friends, Karl Kasten (himself a war veteran, like Bischoff) suggested Bischoff as art teacher for a position still available, at San Francisco's California School of Fine Arts. It was then that Bischoff entered a faculty which already included some of the most talented new artists of post-war America. It is there that he eventually met David Park and Richard Diebenkorn. In 1973, Bischoff was elected into the National Academy of Design as an Associate member, and became a full member in 1985.

While distinct from expressionist art that came from Europe, art of the Bay Area Figurative Movement displays the immediacy and warmth that one sees in abstract expressionist painting. Elmer Bischoff was older than Diebenkorn, and he had experiences in the world that led to his taking an independent turn in painting. Bischoff's quiet and lyrical paintings were serious in a different way from the painting which was being taken seriously at the time; and which saw the rise of Abstract expressionism.