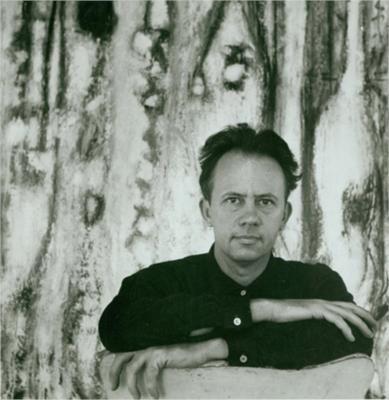 Richard Warren Pousette-Dart (June 8, 1916 – October 25, 1992) was an American artist most recognized as a founder of the New York School of painting. His artistic output also includes drawing, sculpture, and fine-art photography.

Richard Pousette-Dart was born in Saint Paul, Minnesota and moved to Valhalla, New York in 1918. His mother, Flora Pousette-Dart, was a poet and musician; his father, Nathaniel J. Pousette-Dart, was a painter, art director, educator and writer about art. Pousette-Dart began painting and drawing by the age of eight, and in 1928 was featured in a New York Times photograph showing Richard and his father sketching each other's portraits. He attended the Scarborough School and by his teens possessed well-formed views about abstract art, writing in a psychology paper, "The greater the work of art, the more abstract and impersonal it is; the more it embodies universal experience, and the fewer specific personality traits it reveals." He attended Bard College in 1936, leaving after one semester to pursue an independent track as an artist in New York City. Pousette-Dart's first professional positions were as an assistant to sculptor Paul Manship and secretary in the photographic retouching studio of Lynn T. Morgan.

Pousette-Dart initially concentrated on stone carving, expanding his work to include cast bronze and brass. He held in high regard the work of Henri Gaudier-Brzeska, who embraced tribal art and its ability to convey power and mystery through three-dimensional form. During the 1930s, Pousette-Dart frequented the American Museum of Natural History and became deeply interested in the formal and spiritual aspects of African, Oceanic and Native American art, especially carvings produced by Northwest Indian cultures. Many of his paintings and sculptures from the 1930s, such as Woman Bird Group (Smithsonian American Art Museum), embrace these totemic and symbolic forms.

In 1938, Pousette-Dart began a friendship with Russian émigré John D. Graham, whose writings offered a framework for engaging the ideas of European cubists and surrealists then being exhibited in New York City. Graham also encouraged interest in so-called “primitive” archetypal forms, and Pousette-Dart produced canvases with complex, interlocking biomorphic and geometric imagery, as well as hundreds of stylized, abstracted drawings of figures, heads, and animals.

Pousette-Dart's first one-man exhibition of painting took place at the Artists’ Gallery in New York in the fall of 1941, a year after he completed the painting Desert (collection of The Museum of Modern Art. In 1942, he completed Symphony No. 1, The Transcendental, a painting of heroic scale too large to show at the Marian Willard Gallery, where it was to be exhibited. This work was the first mural-sized easel painting by the New York School artists, influencing works such as Mural by Jackson Pollock (1943) and The Liver is the Cock's Comb by Arshile Gorky (1944). During the mid-1940s, Pousette-Dart exhibited at Howard Putzel’s 67 Gallery, Peggy Guggenheim's Art of This Century and, in 1948, joined the Betty Parsons Gallery, which exhibited the work of Mark Rothko, Jackson Pollock, Clyfford Still, Barnett Newman, Ad Reinhardt and other painters who came to shape the formative cannon of the New York School.