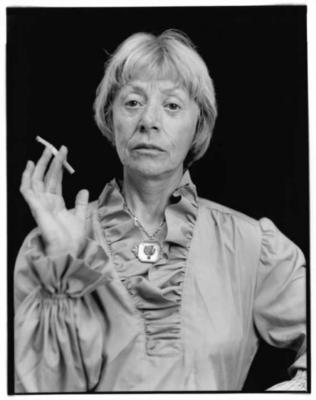 Elaine de Kooning (March 12, 1918 – February 1, 1989) was an Abstract Expressionist and Figurative Expressionist painter in the post-World War II era. She wrote extensively on the art of the period and was an editorial associate for Art News magazine. On December 9, 1943, she married painter Willem de Kooning.

Elaine de Kooning was born Elaine Marie Catherine Fried in 1918 in the Flatbush, New York. Later in life Elaine told people she was born in 1920. Her parents were Mary Ellen O'Brien, an Irish Catholic, and Charles Frank Fried, a Protestant of Jewish descent. Her father Charles was a plant manager for the Bond Bread Company.

Elaine was the eldest of four children; Marjorie Luyckx, Conrad and Peter Fried. Her mother, despite being recalled as less loving and attentive than some parents by Elaine’s younger sister, supported her artistic endeavors.

Elaine's mother started taking Elaine to museums at the age of five and taught her to draw what she saw. Elaine’s childhood room was decorated with painting reproductions. Mary Ellen was committed to the Creedmoor Psychiatric Center for a year during Elaine’s childhood after a neighbor reported her for neglect of her children.

In grade school, Elaine began drawing and selling portraits of children attending her school. She was interested in and did well at sports as well as art. Elaine studied at Erasmus Hall High School in Brooklyn. After graduating from High School, she briefly attended Hunter College in New York City, where she befriended a group of abstract and Social Realist painters. In 1937, she attended the Leonardo da Vinci Art School and went on to study at the American Artists School, both in New York City. While attending school, Elaine made money working as an art school model.

Elaine had admired Willem’s artwork before meeting him, in 1938 her teacher introduced her to Willem de Kooning at a Manhattan cafeteria when she was 20 and he 34. After meeting, he began to instruct her in drawing and painting. They painted in Willem’s loft at 143 West 21st Street, and he was known for his harsh criticism of her work, "sternly requiring that she draw and redraw a figure or still life and insisting on fine, accurate, clear linear definition supported by precisely modulated shading." He even destroyed many of her drawings, but this "impelled Elaine to strive for both precision and grace in her work". When they married in 1943, she moved into his loft and they continued sharing studio spaces.

Elaine and Willem de Kooning had what was later called an open marriage; They both were casual about sex and about each other’s affairs. Elaine had affairs with men who helped further Willem’s career, such as Harold Rosenberg, who was a renowned art critic, Thomas B. Hess, who was a writer about art and managing editor for Artnews, and Charles Egan, owner of the Charles Egan Gallery. Willem had a daughter, Lisa de Kooning, in 1956, as a result of his affair with Joan Ward.