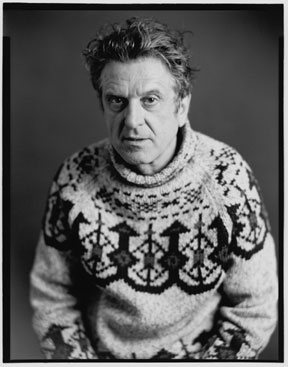 Robert De Niro Sr. was born in Syracuse, New York, to an Italian-American father, Henry Martin De Niro (1897–1976), whose parents emigrated from Ferrazzano, in the province of Campobasso, Molise, and an Irish-American mother, Helen M. (née O'Reilly; 1899–1999). He was the eldest of three children; he and siblings John and Joan were raised in Syracuse, New York. De Niro studied at the renowned Black Mountain College under Josef Albers from 1939 to 1940. While Albers' highly analytical approach to painting did not appeal to De Niro's more instinctive style, the experience and international perspective of the Bauhaus master nonetheless left a lasting impression. De Niro studied with Hans Hofmann at his Provincetown, Massachusetts summer school. Hofmann's teaching, focused on Abstract Expressionism and Cubist formalism, had a strong influence on De Niro's development as a mature artist.

At Hofmann's summer school, he met fellow student Virginia Admiral, whom he married in 1942. The couple moved into a large, airy loft in New York's Greenwich Village, where they were able to paint. They surrounded themselves with an illustrious circle of friends, including writers Anaïs Nin and Henry Miller, playwright Tennessee Williams, and the actress and famous Berlin dancer Valeska Gert. Admiral and De Niro separated shortly after their son Robert De Niro Jr. was born in August 1943 after De Niro came out as gay. In 1944, De Niro had a relationship with the poet Robert Duncan.

After studying with Hans Hofmann in New York and Provincetown and Josef Albers at Black Mountain College, North Carolina in the late 1930s and early 1940s, De Niro worked for five years at Hilla Rebay’s legendary Museum of Non-Objective Art. In 1945, he was included in a group show at Peggy Guggenheim’s Art of This Century in New York, which was a leading gallery for the art of both established European modernists and members of the emerging Abstract Expressionist group like Jackson Pollock, Mark Rothko, Robert Motherwell, and Clyfford Still. De Niro had his first solo exhibition at Peggy Guggenheim's gallery in April and May of the following year. At that point, he was primarily working in an abstract manner, often with figural references. Much of his work from this period was lost in a studio fire in 1949.

De Niro had a series of solo exhibitions in the 1950s at the Charles Egan Gallery in New York, which exhibited the work of Willem de Kooning and other early abstract expressionist artists. Critics praised DeNiro’s compositions filled with improvised areas of vibrant color that gave way to loosely painted still lifes and curvaceous nudes. By the mid-1950s, De Niro was regularly included in important group exhibitions such as the Whitney Annual, the Stable Annual, and the Jewish Museum. He was awarded a Longview Foundation award in 1958.