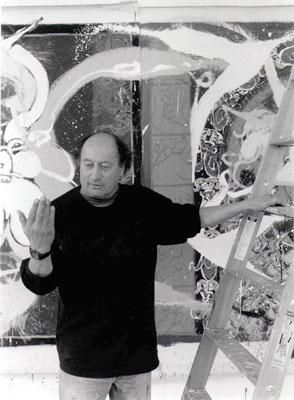 Norman Bluhm (March 28, 1921 – February 3, 1999), was an American painter classified as an abstract expressionist, and as an action painter.

He was born on March 28, 1921 in Chicago, Illinois. He studied under Mies van der Rohe at the then Armour (now Illinois) Institute of Technology. After service in World War II with the USAAF he decided not to resume his architectural studies. Rather he studied art at the Academia de Belle Arte, Florence, Italy and at the Ecole des Beaux Arts in Paris. From 1948 until 1956 he lived in Paris. He had numerous friends in art, literature, and other creative fields. Among his close acquaintances were Joan Mitchell, Sam Francis, Jean-Paul Riopelle, Zao Wou-ki and others. He was married to Claude Souvrain until 1956. He returned to the United States in 1956. He married Carolyn Ogle in 1961. They lived in New York City until 1969 with their two children, David and Nina. From 1970 to 1980 they lived in Millbrook, New York. From 1980 to 1987 they lived in East Hampton, New York. Thereafter, they lived in East Wallingford, Vermont until Bluhm's death on February 3, 1999.

Bluhm's work has been critically praised and his works are in the collections of many major museums. His work changed throughout his career while retaining certain elements (brush strokes, use of color and line, etc.) that to the discerning viewer are obvious. Unlike some artists of note he continually challenged himself to reach new areas and artistic achievements based on his profound knowledge of art and art history, use of the human figure, color, and a passion for life. Among his more noted work are a series of poem paintings done with his good friend the poet Frank O'Hara. Shortly before Bluhm died, in 1999, Art in America editor Raphael Rubinstein predicted that this body of work would be as important to the 21st century as Cézanne’s later output was to the 20th.

Bluhm's work while recognized and praised has never received the measure of attention that some of his contemporaries, such as Joan Mitchell and Riopelle, have. In part, this is due to Bluhm's unwillingness to cater sufficiently to those in the commercial art world. Also changing art tastes in the 60's with the advent of Pop Art (which Bluhm found utterly lacking in beauty and passion) placed Bluhm in a critical netherworld.

In 2007, the Station Museum of Contemporary Art in Houston, Texas, organised a major exhibition under the title 'The Late Paintings of Norman Bluhm'[1]. The Houston Press reported that The New York artist’s panoramic paintings are patterned like stained glass windows or mandalas, but the shapes inside are sexy[2] while Garland Fielder's review at Glasstire mentioned that Bluhm’s paintings project such a life-affirming and honest candor, one cannot help but feel awash in a glow of spiritual joy[3].